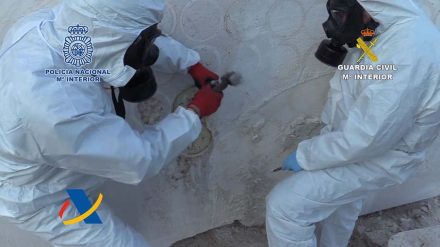 There are always cases where drug dealers hide narcotics in blocks of natural stone and send them on their way. In March 2020, the Spanish Guardia Civil found a total of 732 kg of high-purity methamphetamine in shipments from Mexico. According to the police authorities, this is the largest quantity that has ever been seized at one go.

A certain elegance must be attributed to the dealers, as they placed the drugs in the marble blocks. This is also indicated by the Guardia Civil in its press release: the dealers had milled cylinders out of the stone, placed their drugs in PVC containers of the same shape, then placed a marble plug on the tube, sealed the edge with resin and finally covered the surface with a high-performance mortar.

The investigation began last August. At that time, the authorities in Spain had noticed a company that imported marble blocks from Mexico without really having anything to do with the stone industry. It was decided to keep an eye on those involved in a cooperation between customs, the Guardia Civil and the police.

In October 4 containers with 6 marble blocks of about 25 tons each arrived.

The authorities observed the onward transport, which led to a quarry in the city of La Romana in Alicante. There the block in question was first covered with “a large quantity of stones and other debris”, according to the press release of the Guardia Civil. 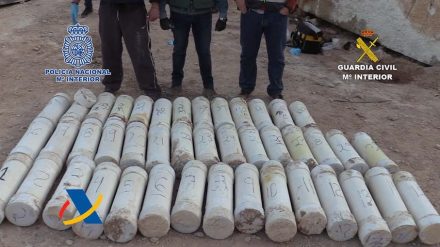 352 kg of methamphetamine was hidden inside. This is a narcotic drug closely related to the better-known amphetamine. How the officials got to the bottom of the blocks and how they found the drillings there is not mentioned in the press release.

A little later a second shipment arrived from Mexico, this time with 5 containers and 400 kg of methamphetamine in one of the blocks.

When 5 people were arrested, 150,000 €, firearms and vehicles were seized. Bank accounts were frozen, real estate was confiscated.

In recent years, drugs had been hidden in blocks of stone, for example in Brazil. However, the dealers had only ever chiseled out very crude cavities from the stone and then clumsily closed them.

In the meantime, the marble blocks with the holes have been seized as evidence. Also confiscated were those blocks that had been sent along only for camouflage.