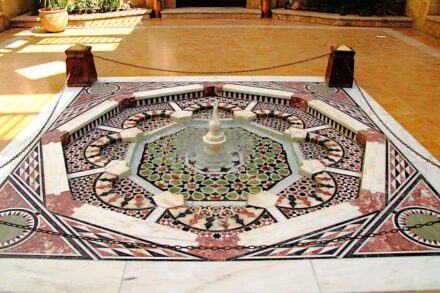 The Islamic Conference of Culture Ministers has again awarded the title for the regions of Arabia, Asia and Africa

Since 2005, the title “Capital of Islamic Culture” has been awarded for one year at a time. It refers to 3 regions where this religion is particularly common: in 2020, for the Arab world it is the Egyptian capital of Cairo, for Asia the city of Bukhara in Uzbekistan, and for Africa the Malian capital Bamako. The body responsible for awarding the contract is the Islamic Conference of Culture Ministers, organizer is the Islamic World Educational, Scientific and Cultural Organization (ISECO).

As usual we looked up what there is to report from the selected cities in terms of natural stone.

Even with little research, you can find a wealth of things worth mentioning for Cairo. For example, the Egyptian Museum has an enormous variety of stone art treasures from the time of the pharaohs. These are world-famous sculptures or sarcophagi with mummies of the rulers and infinitely more examples.

Thus, let us have a short view to the stone sights that are off the beaten path. There are for example old villas in the side streets that with gorgeous façades or entrances. Many of them are in danger of demolition to be replaced by modern buildings. A video reports about an initiative of local architects who want to preserve these jewels and give them a new lease on life.

Or: the Al-Azhar Park, a huge garbage dump for centuries, but redesigned in 2005 by the Aga Khan Development Network. According to the Islamic doctrine that water is a gift from God to mankind and that a beautiful park can enrich life on earth like a paradise, you will find a variety of water features and beautiful stone works (see photo above). 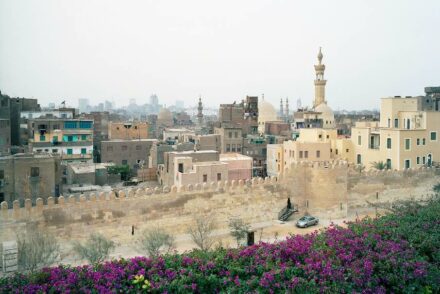 Last but not least, the park also includes an old limestone city wall, which came to light during the excavations on the site and has been restored. The nearby al-Azhar Mosque with its limestone façade and an inner courtyard with marble floor is also worth seeing for those interested in stone. With this you are already back in noisy Cairo. 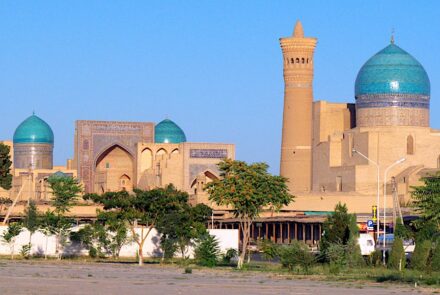 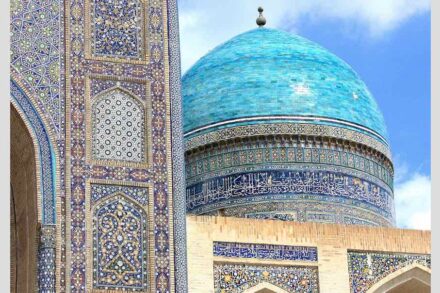 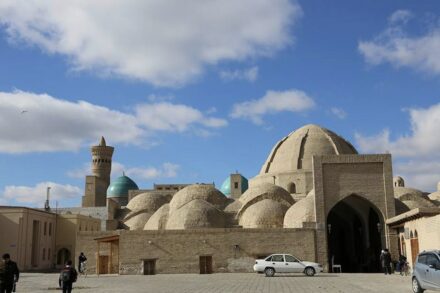 Bukhara in Uzbekistan is one of those places that are as old as human culture itself. The area has been inhabited for about 5000 years and has always played a major economic and political role along a crossroads of several arms of the side street. Merchants and conquerors passed by in large numbers, among others Genghis Kahn or in modern times the Soviet power. In 1924 Bukhara was incorporated into the newly founded Uzbek Soviet Socialist Republic.

The historical center of Bukhara has been a UNESCO World Heritage Site since 1993. It received this rank not only because of the many striking buildings, which stand for an independent architecture, but also for the modern urban planning, which has been implemented there for centuries and is still recognizable today.

The dominant building material from ancient times is brick (bricks). As decoration on the facades they are available in glazed form, as well as a lot of ceramics. The patterns combine flower motifs, elements of calligraphy and geometric firms. On closer inspection, the magnificent mosaics also contain elements of colored natural stone.

Bamako is the capital of Mail and is considered one of the fastest growing cities on the continent. It is located on the Niger River and is an important hub for the country’s commercial goods.

We could not find any outstanding buildings with stone, even though there will be luxury hotels in a city of 2 million inhabitants. A central building is the Grand Mosque, which was built with support from Saudi Arabia. The facade here is only painted white, not covered with white marble.