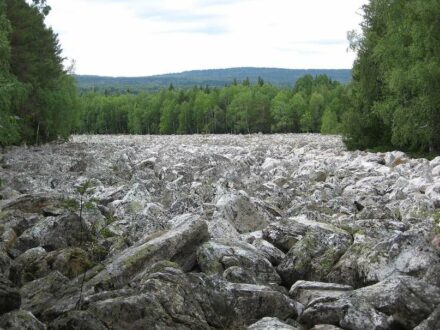 The Big Stone River in Taganai Park in the southern Urals in Russia is spectacular: a long field of large boulders runs like a river through the dense forest. It is probably the remnant of a glacier from the last ice age (1, 2).

Spanish Grupo Cosentino was founded 40 years ago (on April 14, 1980) as Mármoles Cosentino S.A. Nowadays, it is in active in 40 countries and has more than 5000 employees mainly producing its artificial stones like Dekton or Silestone. In 2019, the turnover was above 1,1 billion € (Spanish).

Microplastic is driven by deep-sea currents across the seafloor and accumulated in certain spots in the sediments, a study from Durham University has revealed.

Researchers from the University of Hawaii have identified the once largest and hottest shield volcano on Earth, which today is only a small island.

The Island Marble Butterfly (Euchloe ausonides insulanus), once thought to be extinct and then rediscovered in the San Juan Islands in Washington state in the US, has now again been listed as endangered species (1, 2).

The ‘Lettere patenti’ may help assess the intensity of earthquakes that struck central Italy in 1703. The old documents from the bureaucracy of Rome granted residents permission to repair damage to their buildings, according to a report in the Seismological Research Letters.

Video of the month: The giant waves off Nazaré, just 120 km north of Lisbon, are famous among surfers. They reach heights of up to 30 m. The reason is a 230 km long and almost 5 km deep canyon on the sea floor, which runs straight to the coast. In winter, the energy from storms at sea is concentrated through this channel on its way to the shore. Westerly winds can amplify the waves.