China, US and EU are the largest economies in the world

Eurostat has released the 2017 results of the International Comparison Program

In 2017, the Gross Domestic Product (GDP) of the European Union with 27 Member States (EU) represented 16.0% of world GDP, expressed in Purchasing Power Standards (PPS). China and the United States were the 2 largest economies, with shares of 16.4% and 16.3%, respectively. India was the fourth biggest economy, with 6.7%, followed by Japan with 4.3%. The visual above shows this ranking, including those countries that have a share larger than 1%.

The Purchasing Power Standard (PPS) is an artificial currency unit that eliminates price level differences between countries. Thus, one PPS buys the same volume of goods and services in all countries.

These data are published by the Global Office of the International Comparison Program (ICP) at the World Bank, and are the result of the 2017 round of the ICP. The ICP is a worldwide statistical partnership to collect comparative price data and compile detailed expenditure values of countries’ GDP, and to estimate purchasing power parities (PPPs) for the world’s economies.

Yet: While the US and China are about the same size in terms of GDP in PPS, their respective GDP per capita differs by a factor of four, as shown in the table above. 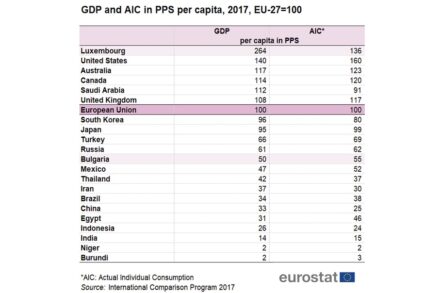 Indices of GDP and actual individual consumption (AIC) per capita in PPS, with EU-27=100, for a selection of countries that show highest or lowest rates, respectively. While GDP per capita is mainly an indicator of the level of economic activity, AIC per capita is an alternative indicator better adapted to describe the material welfare of households. AIC consists of goods and services actually consumed by individuals, irrespective of whether these goods and services are purchased and paid for by households, by government, or by non-profit organizations.

Eurostat, the statistical office of the European Union is a partner in the ICP and provided the required data for37 European countries. It works closely together with OECD in a joint PPP program. OECD provided the data for the non-European OECD countries used in the International Comparison Program.