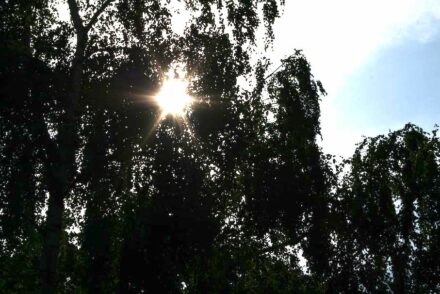 Not only the high albedo of the material can keep the microclimate within limits, but also an installation that promotes rainwater seepage

In the middle of summer, life in the city can become unbearable when the heat stands between the canyons of houses for weeks on end and even at night the temperatures don’t drop any more. It is particularly bad in the so-called urban heat islands. A research project in the French city of Lyon has now investigated to what extent certain floor coverings on streets and squares can help reduce such heat stress for residents and plants. The French magazine Pierre Actual, itself based in Lyon, has reported on the results: light-coloured granite achieves the very best values in heat equalization and a specific substructure under such a pavement can further enhance the positive effect.

What is important with these findings is that they were achieved on a scientific basis. Up to now there has only been experience in this respect, but this has not really provided planners with reliable data.

The test area in Lyon was the district of Part-Dieu, which is a business centre directly adjacent to the main railway station. Its importance for the city means that it is considered a secondary centre next to the old town. 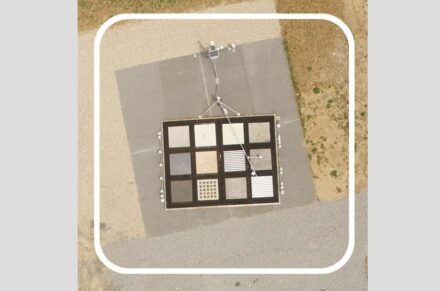 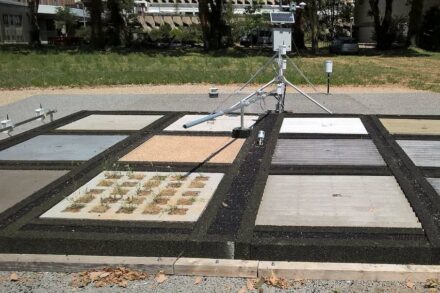 In 2017, test areas with natural stone, sand, asphalt and concrete were installed in Rue Dr. Bouchut. From May until autumn, their temperatures were measured: 2 cm of the respective floor coverings, directly on their surface and inside. 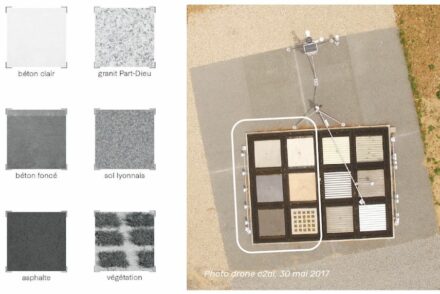 Numerous other factors were determined, including how far a material radiates the sun’s heat and light. The measure for this is the albedo, which also provides information about how much a surface warms up. It is well known that it is particularly high on reflective or white surfaces, for example snow. 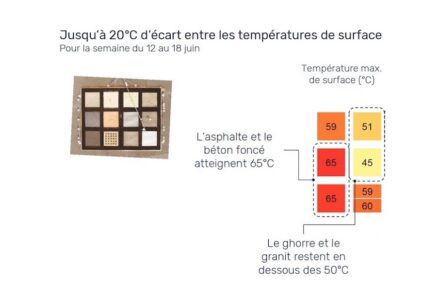 Light granite scored best in the measurements during the 6 months of testing. The maximum temperature on its surface was always below 50 degrees or close to it, respectively, while concrete and especially asphalt recorded more than 65 degrees.

To illustrate: 15 degrees is the difference between a nice day in spring and a really hot one in midsummer.

Compacted sand had slightly better temperature values than granite because of its high porosity. However, sand is not suitable for zones with heavy use over.

Another test area was used to investigate how more rainwater could be channelled into the soil. This is because percolation can have several positive effects on the urban climate: firstly, indirectly via the trees and their leaves, and secondly, indirectly, in that on hot summer nights the water rises again from the subsoil, evaporates at the surface and thus lowers temperatures.

Stones of light granite measuring 45 x 15 x 12 cm were laid as paving stones. Below was a special layer of earth with large stone chunks (called “terre-pierre”). This proved to be ideal for absorbing and distributing the rainwater that came down through the joints. Next came a layer of pervious concrete (béton drainant C20, granulométrie 10/20), then the base for the stone paving (gravette 4/6 concassé granitique).

The rainwater was also available to the roots of the trees. Maia-Sonnier company was responsible for the paving work.

Granite paving and the new type of substructure are already used in the redesign of the Place de Francfort on the other side of the station, recently.

The project also considered the running costs for the different paving stones. Natural stone also convinced here with its ecological strengths: it is easy to maintain, resistant to damage and easy to repair. Stones also have an extremely long life and can be reused practically indefinitely. 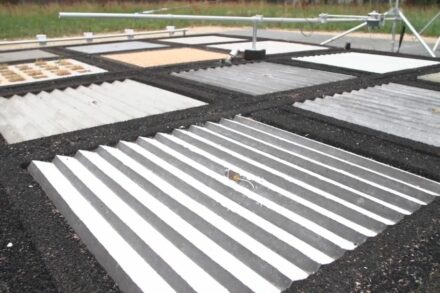 In addition, innovative floor coverings were investigated, such as concrete slabs with ripples. The question here was whether such surfaces could have a double balancing effect on temperature: if the corrugations were light on one side and dark on the other, they might radiate heat in summer and vice versa in winter. In the reports, however, the idea is only mentioned and not discussed further.