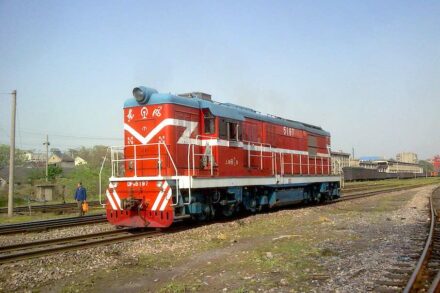 The railway could also play an important role for the natural stone trade along the new Silk Road (One Belt, One Road)

The Corona crisis has shed light on the transport of goods by rail from China to Europe, as the Chinese government has made intensive use of this mode of transport in connection with deliveries of protective clothing.

So far, it has not received much public attention. In the meantime, regular container trains run from various stations in China via Russia, Belarus and Poland to Spain, Great Britain, Germany and the Baltic States.

And even China’s stone industry has its sights set on the topic, as Association President Chen Guoqing told us: “We expect railway transportation to play a more important role in trade among countries under our One Belt, One Road initiative, and promote trade and cooperaton in stone business between countries involved.“

Up to now, it was mostly special offers from the clothing industry or consumer goods. In comparison with shipping, this is half the time, and when compared with air travel, the price is reduced by half or even less.

Even car companies are already making intensive use of the possibilities. BMW, for example, sends vehicle parts from Germany to its plant in Shenyang. Conversely, the Swedish Volvo has complete cars transported by rail from the Chinese province of Heilongjiang to the Belgian port of Zeebrugge, from where they are further distributed.

The first long-distance test drive was from China to the German city of Duisburg in 2008.

The challenges were enormous:
* on the way changes the track width several times;
* as far as freight law is concerned, “CIM” applies in Europe, but “SMGS” applies in the CIS states and China;
* communication along the routes will be in Chinese, Russian or English.

In the meantime, however, there are regular connections both eastbound and westbound. The end points are called “antenna stations” in jargon. In the west, these include Madrid, Hamburg, Duisburg, London and Riga. 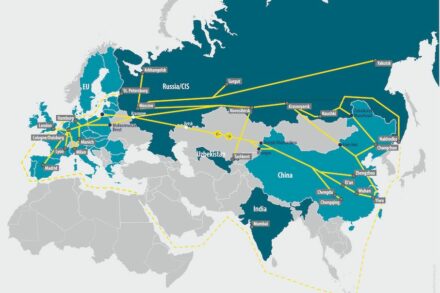 A leading player in this business is the Swiss Interrail Group. It was even allowed to transport its goods on the Trans-Siberian Railway during the Cold War and had organized continuous rail transport from the West or Japan through the Soviet Union to the Middle East.

Today, the network of routes along China’s One Belt, One Road has several branches. At the end of August 2016, the 1st train left China for Afghanistan. It took 9 days and covered a distance of about 7500 km.

Besides the so-called block trains, where a complete train travels from start to finish, there are now even open trains for the loading of individual containers or groups of containers.

Companies have also tested rail transport for goods other than those mentioned above: in June 2017 a train carrying French wine ran from Duisburg in Germany to Yiwu in China. “The data recorded (temperature, humidity, acceleration forces and differences in altitude) allowed experts an in-depth insight into the viability of this logistics solution for the beer and wine industries,” as per the website of the Interrail Group. The conclusion: normal containers are not suitable for wine, there is no getting around cool boxes or special packaging.

The current objective is: on the routes “from the Chinese to the European hub”, the aim is to reduce the journey time to 10 days.

However, despite Corona, times seem to have become more difficult. At a meeting of the Coordinating Council on Trans-Siberian Transportation (CCTT) as early as September 2019, lobbyists had complained that China’s subsidies for train costs will fall from 40% in 2019 to 30% (in 2020) and to 20% (in 2021).

Finally: how will the shipping industry react?

The industry giant Maersk from Denmark sent containers by rail from St. Petersburg to Vostochniy in Siberia in March 2020. There they were transferred to the Group’s ships and brought to Korea and Japan. The journey took between 23 and 32 days, which is half as much as the previous 52 to 57 days, according to the company’s website.