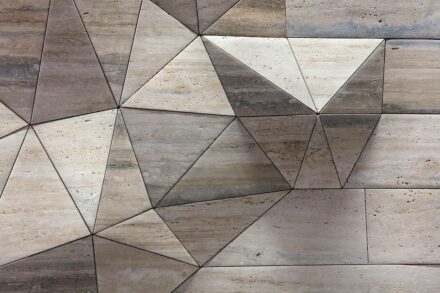 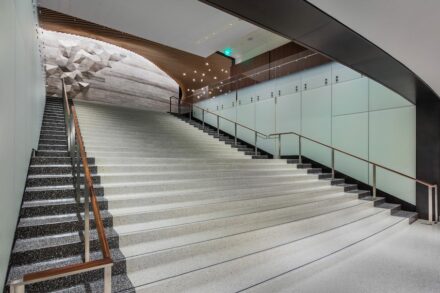 A wide and high staircase always holds a magical promise, namely that the visitor will find something special at the top. A real sensation lies at the end of the staircase in the skyscraper Two Union Square in Seattle, USA: it leads from the entrances on the 1st and 2nd floors to the lobby on the 3rd floor and ends there in front of a striking fault in the stone wall.

The magical promise here is the violence of the forces of nature, which is depicted.

Some reporters have rediscovered the surrounding cliffs in this work of art; we would rather see in it the work of the glaciers, which last covered the area with an ice sheet of around 1000 m thickness some 15,000 years ago, sanding down the landscape on the one hand and piling up moraines of sand and erratic blocks in places on the other.

Or, perhaps even: is the tectonics of the earth’s plates represented here, because, well, we are on the west coast of the USA and at some point, somewhere here there will be another violent underground movement. 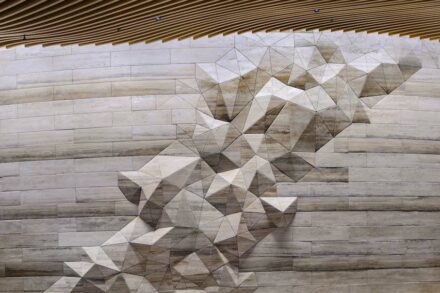 The great thing about the concept of the architectural office NBBJ is the fact that the whole wall is actually evenly rounded. It covers the inner core of the building. Only at one point, where the staircase ends, does our “tectonic fault” rise above the flat travertine cladding, and not just from top to bottom, but at an angle.

There is a smaller version for the elevators.

The work of art derives its force from the abstraction with which the forces of the earth are represented here: the “fault” is formed with prisms, tetrahedra and irregular pyramids that are somewhat reminiscent of mountains and valleys. But high and low are only hinted at and do not grow into real mountain ranges or valley incisions.

This shows, if you like, that the crust of this planet will never come to rest. This is because the heat as a driving force inside the earth’s crust originates in part from the liquid phase billions of years ago and has since then been continually regenerated by the decay of the radioactive elements.

Wood can also be found in the lobby, as the architects explicitly wanted to bring the surrounding landscape into this 56-floor building.

This, in turn, has to do with the concept they presented for the renewal of the skyscraper: whereas the lobby was once just a place where the streams of visitors split up, it now offers a variety of opportunities where people can sit down and work on mobile devices they brought along. The search for tenants was about “attracting more connected and mobile enterprises”, as the architects write. 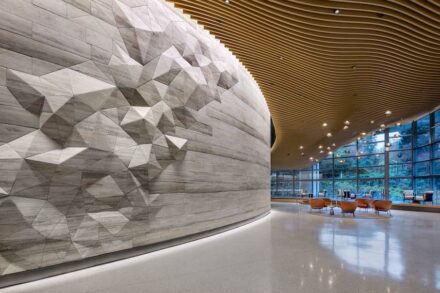 The travertine on the wall comes from the quarries of Tivoli in Italy and was supplied by the company Fratelli Poggi. Among other things, the colors for the horizontal bands were already selected in the quarry. The many steps up to the installation on the wall by the company Synergism Stone are described in detail in an online report in the magazine Architect of the American Institute of Architects. 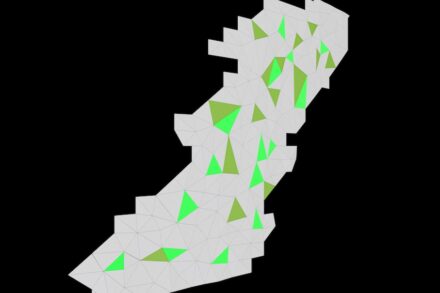 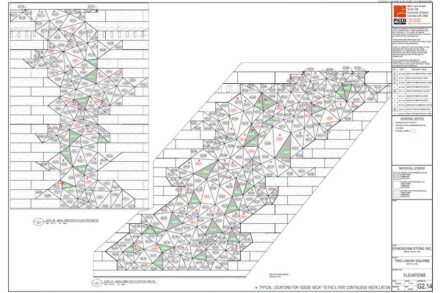 The Canadian company Picco Engineering played a special role here: since each individual element has its own geometry within the tectonic fault, exact specifications were required not only for cutting. There were also detailed instructions for the installation, as the elements are anchored to the wall behind and to their neighbors.

By the way, the installation was carried out from top to bottom.

This unusual wall design once again showed the strength of natural stone: if the elements had been made of concrete or artificial stone, for example, casting and cutting would have been very expensive. But with CNC planning and direct implementation by wire saw, this can be done quickly and cost-effectively.

Travertine is also a material whose surface enhances the expression of wild nature. 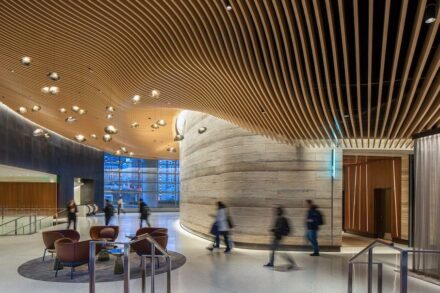 Among other things, a special concept for the lighting was developed and tested in the model – in this way it was possible to achieve that the elements do not have to protrude more than 5 cm from the wall and that the fault still appears very plastic.

All in all, the cutting was done with the greatest precision. On the one hand, visible joints were needed to emphasize the geometry of the individual elements; on the other hand, they were not allowed to interrupt the homogeneity of the rock landscape.

Architect, Journal of the American Institute of Architects