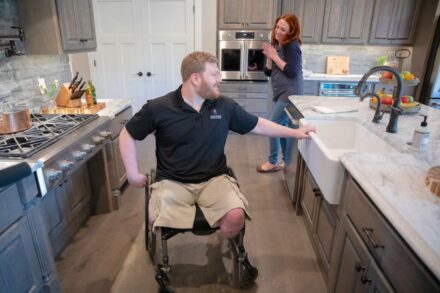 Natural stone and fabrication services for US Army SSG Casey Jones and his family were provided by Triton Stone Group and StoneWorld.

Casey joined the US Army in 2008 and became a Senior Explosive Ordinance Disposal (EOD) team member. On May 16, 2013 while deployed in Senjaray, Afghanistan, Casey was tasked with clearing a compound that would serve as the location for a command post. As he was assisting his team leader, Casey stepped on a pressure-plate improvised explosive device (IED) which detonated beneath him, causing him to lose both of his legs.

Casey was initially sent to NATO Role 3 Multinational Medical Unit and would eventually end up at Walter Reed National Military Center. At Walter Reed, case was motivated by the progress other amputees were making and felt that anything was possible. He spent two years learning how to walk again, and although the process was grueling, his wife Shannon was there to support him every step of the way.