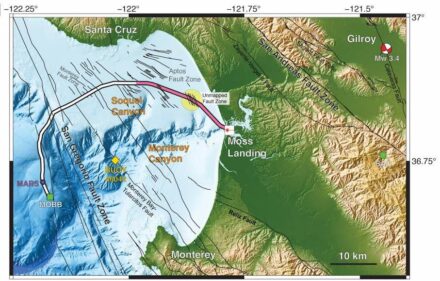 In studies at several universities, light pulses are sent through optical cables to measure deformations in sections of the fibers caused by changes in the surroundings

Fiber-optic cables that constitute a global undersea telecommunications network can help scientists study offshore earthquakes and the geologic structures hidden deep beneath the ocean surface. In experiments under Monterey Bay at the coast of California, researchers used so-called Distributed Acoustic Sensing, which employs a device that sends short pulses of laser light down the cable and detects the backscattering created by strain in the cable that is caused by stretching.

With interferometry, they measured the backscatter every 2 meters (6 feet), effectively turning a 20-kilometer cable into 10,000 individual motion sensors.

“The beauty of fiber-optic seismology is that you can use existing telecommunications cables without having to put out new seismometers,” Nate Lindsey, a UC Berkeley graduate student, is quoted in a publication. “You just walk out to the site and connect the instrument to the end of the fiber.”

In an earlier six-month trial on land, scientists had used 22 km of underground cables near Sacramento with the same results.

Another group of scientists made similar experiments on Iceland at the geological fault zone in the rift between Eurasian and American tectonic plates. The study not only showed well-known geological structures and volcanic dykes. The scientists also found a previously unknown fault, below the ground surface. Furthermore, the team measured subsurface deformation taking place over a period of several minutes.

The technology may also be used for glacier monitoring. Scientists from ETH Zürich had installed a fiber optic cable 1 km long and a few cm deep in the snow cover of the Rhone glacier at an altitude of 2500 m in canton Valais, Switzerland. They were able to localize rockfalls and icequakes and gained new knowledge about the flowing movements of the glacier.