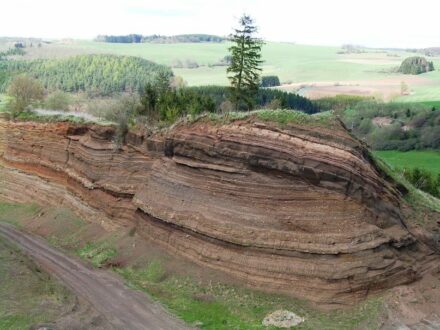 There is no danger, but measurements show an uplift and stretching in the ground / Until now it was believed that volcanism there was a thing of the past

To make it clear in advance: there is no danger of a volcanic eruption or an earthquake in the middle of Central Europe, but the earth’s crust is in motion, there. This is what scientists write in the Geophysical Journal International: They found out that the Eifel mountain region in Germany is still a geologically active zone, which rises a few millimeters every year.

Until now, scientists assumed that the seismic activity in the area between Germany, Belgium, France and Luxembourg had come to an end since the last volcanic eruption about 13,000 years ago.

In the article Paul Davis, Professor for Geophysics at the University of California (UCLA), reports about “unusual movements” in the underground under the Eifel. “The land surface in that region is lifting up and stretching apart. Although the uplift is only a fraction of an inch per year, it is significant in geological terms,” Davis is quoted on the UCLA’s webpage.

The geophysicists analyzed global positioning system data from across Western Europe. That enabled them to map out how the ground is moving vertically and horizontally as the Earth’s crust is pushed, stretched and sheared.

The dome-like uplift they observed suggests those movements are generated by a rising subsurface mantle plume, which occurs when extremely hot rock in the Earth’s mantle becomes buoyant and moves upwards, sending extremely hot material to the Earth’s surface, causing the deformation and volcanic activity. The mantle is the geological layer of rock between the Earth’s crust and its outer core.

“It seems clear that something is brewing underneath the heart of northwest Europe,” said Corné Kreemer, the study’s lead author and research professor at the University of Nevada, Reno’s Nevada Bureau of Mines and Geology.
The Eifel volcanic region houses many ancient volcanic features, including circular lakes known as maars – which are remnants of violent volcanic eruptions. Laacher See, the largest lake in the area, is the xrater of an explosion approximately 13,000 years ago, with a power similar to that of the spectacular 1991 Mount Pinatubo eruption in the Philippines.