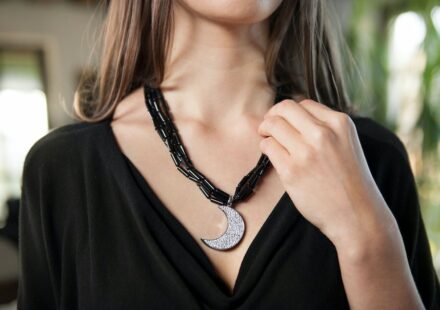 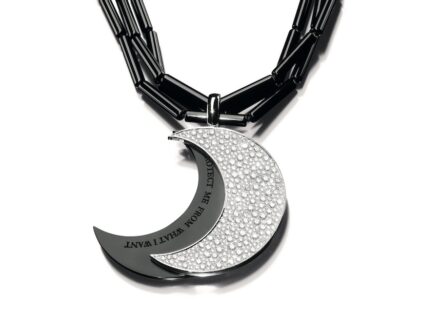 To make things clear right away: in the following we are talking about real onyx, not onyx marble. Genuine onyx is a variation of quartz (calcedony), like agate, and is used for jewelry. Onyx marble is a variation of limestone, also has an unusual appearance and is popular with sculptors.

Black onyx plays an important role in “Spirit”, a new jewelry creation by the Austrian family business Schullin. The necklace was awarded one of the German Design Awards this year. It can also be worn around the wrist.

The jewellery is made of black onyx, as is the pendant. It has the shape of the crescent moon, or more precisely: a waning crescent moon in the last quarter.

The onyx is usually hidden under the same crescent shape in white gold (18 carats). It is set with 202 diamonds totalling 3.85 carats.

However, the stone crescent can be pushed out, and then the engraving “Protect me from what I want” can be read there.

The phrase is meant as a reference to Jenny Holzer’s “Truisms”: the US artist had become famous in the late 1970s when she brought short sentences on treadmills to the walls or later had them carved into granite benches. Some of these were empty phrases such as “Labour is a Life-Destroying Activity”, others were political statements like “Private Property Created Crime”.

The sentence “Protect me from What I Want” became famous, on the basis of which one can philosophize excellently about sex, gender relations and much more.

Now the rebirth of one of these Truisms on the necklace, designed by company boss Hans Schullin. Under the name “Moon”, this piece of jewellery is also available in a version with 126 diamonds and 2.53 carats. “Spirit” is also available as a necklace.

We still have to report about a very unusual marketing campaign. It was titled “A Worldwide Friendship – A Diamond Moon Travels Around the World”: a “Spirit” specimen had been on a journey around the world for 3 years.

After take-off at Graz airport, the piece had first gone to a (female) recipient in New York City, who was allowed to keep it for 10 days and then passed it on to a (female) friend. The stations are documented in a blog.

In the meantime the travelling “Spirit” has arrived back in Austria, of course brought back to earth in proper style by a parachutist. This is documented in a video.

“A Worldwide Friendship A Diamond Moon Travels Around the World”