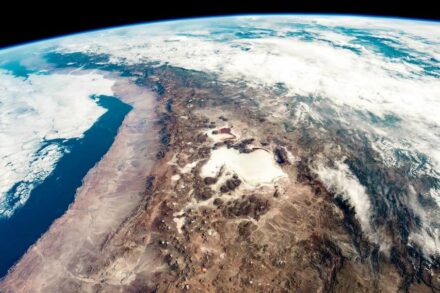 Which forces and mechanisms determine the height of mountains? A group of researchers from Münster and Potsdam has now found a surprising answer: It is not erosion and weathering of rocks that determine the upper limit of mountain massifs, but rather an equilibrium of forces in the Earth’s crust. This is a fundamentally new and important finding for the earth sciences. The researchers report on it in the scientific journal Nature.

Yet to be cleared is if whether these findings are also true for the many mountain ranges that are not close to subduction zones, e.g. fault-block mountains.

The highest mountain ranges on Earth – such as the Himalayas or the Andes – arise along convergent plate boundaries. At such plate boundaries two tectonic plates move toward each other, and one of the plates is forced beneath the other into the Earth’s mantle.

A new study led by Armin Dielforder of GFZ German Research Centre for Geoscience now shows that erosion by rivers and glaciers has no significant influence on the height of mountain ranges. Together with scientists from the GFZ and the University of Münster (Germany), he resolved the longstanding debate by analyzing the strength of various plate boundaries and calculating the forces acting along the plate interfaces.

The researchers arrived at this surprising result by calculating the forces along different plate boundaries on the Earth. They used data that provide information about the strength of plate boundaries. These data are derived, for example, from heat flow measurements in the subsurface. The heat flow at convergent plate boundaries is in turn influenced by the frictional energy at the interfaces of the continental plates. 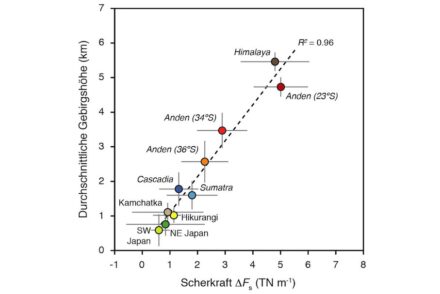 The researchers collected worldwide data from the literature on friction in the subsurface of mountain ranges of different heights (Himalayas, Andes, Sumatra, Japan) and calculated the resulting stress and thus the forces that lead to the uplift of the respective mountains. In this way they showed that in active mountains the force on the plate boundary and the forces resulting from the weight and height of the mountains are in balance.

Such a balance of forces exists in all the mountain ranges studied, although they are located in different climatic zones with widely varying erosion rates.

This result shows that mountain ranges are able to react to processes on the Earth’s surface and to grow with rapid erosion in such a way that the balance of forces and the height of the mountain range are maintained.