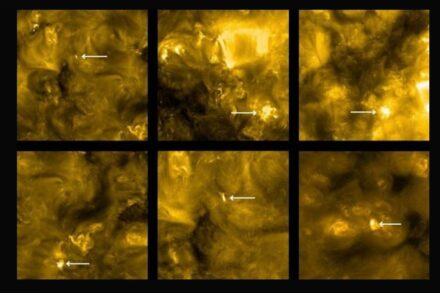 The first images from ESA/NASA’s Solar Orbiter are now available to the public, including the closest pictures ever taken of the Sun.

Solar Orbiter is an international collaboration between the European Space Agency ESA, and NASA, to study our closest star, the Sun. Launched on Feb. 9, 2020 (EST), the spacecraft completed its first close pass of the Sun in mid-June.

As one of its special features, the orbiter carries an Extreme Ultraviolet Imager (EUI) to take red and yellow images in the extreme ultraviolet region of the electromagnetic spectrum, at wavelengths of 30 and 17 nanometers, respectively.

The close-up views by EUI show the upper atmosphere of the Sun, or corona, with a temperature of around 1 million degrees. With the power to see features in the solar corona of only 400 km across, these images reveal a multitude of small flaring loops, erupting bright spots and dark, moving fibrils. A ubiquitous feature of the solar surface, uncovered for the first time by these images, have been called ‘campfires’. They are omnipresent miniature eruptions that could be contributing to the high temperatures of the solar corona and the origin of the solar wind.

“The campfires here are the little nephews of solar flares, at least a million, perhaps a billion times smaller,” said principal investigator David Berghmans, an astrophysicist at the Royal Observatory of Belgium in Brussels. “When looking at the new high resolution EUI images, they are literally everywhere we look.” 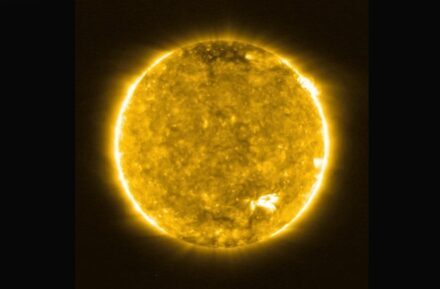 It’s not yet clear what these campfires are or how they correspond to solar brightenings observed by other spacecrafts. But it’s possible they are mini-explosions known as nanoflares – tiny but ubiquitous sparks theorized to help heat the Sun’s outer atmosphere, or corona, to its temperature 300 times hotter than the solar surface.

The spacecraft had its first close solar pass on June 15. As it flew within 48 million miles of the Sun, all 10 instruments flicked on, and Solar Orbiter snapped the closest pictures of the Sun to date. Other spacecraft had been closer, but none have carried Sun-facing imagers.

Solar Orbiter carries six imaging instruments, each of which studies a different aspect of the Sun.