New construction of the Albula Tunnel in the Swiss Alps: at 1192 m driving, the rock is like a “paste and floating” for 21 m 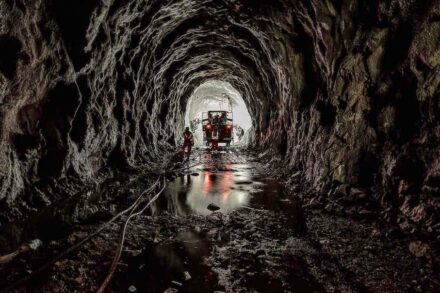 Even 110 years after the 1st tube through the mountain, the challenges for the engineers are still great

This time the engineers were warned that they would be faced with difficult rock from 1127.5 m of driving: we are talking about the new construction of the Albula Tunnel in the Swiss Alps, where extreme problems had arisen during the first tunnel construction 110 years ago just at 1192 m, that the work was completely suspended for 9 months and that in the end only with unprecedented efforts was the railway line through the mountain completed.

This time the problem zone with 21 m length was completely icy. This is the current technique when working in such rock.

We learn: a mountain is not at all a mass of hard material, but can also be a kind of “paste”, for example, as it says on the website of the project: at 1192 m (after tunnel entrance Preda) we are dealing with a skeleton of rock with mud fillings, and on top of that there are heaps of crevices in this zone, from which ice-cold water shoots out at a pressure of 6 atmospheres. On the webpage the inner life of the mountain is described as “floating” at this point.

At Preda, on the other hand, everything starts almost comfortably. Allgäu slate is first of all the material that is easily degradable and stable.

But more and more water-bearing fissures appear until the problem zone with Raibler-Rauwacke follows. In the 1st tunnel, the walls in this area did not even manage to stabilize at first – in 2.5 months, only 6.3 m progressed. Only with “the heaviest support measures” was it possible to get back into solid material.

Then follows a largely problem-free stretch of 55 m with mylonite, which is repeated later with 66 m length.

From there to the end in Spinas one has to deal with Albulagranite. Under this name different rocks like granites, granidiorites and gabbros are summarized. Even if there are smaller fault zones, the mountain is unproblematic for the miners here – so much so that in the first tunnel they even refrained from cladding the walls in places. 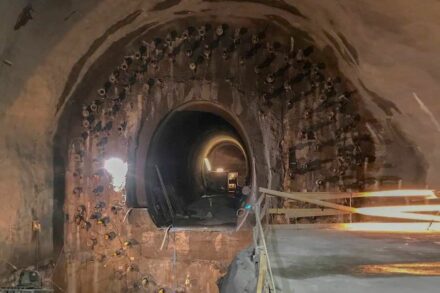 In 2006, investigations by the Rhaetian Railway revealed that “more than half of the 5864 m long tunnel tube is in poor condition and needs to be renewed”. The experts played through the options of renovation or new construction in every detail and came to the decision for a new tube, which runs 30 m next to the old one and is connected to it approximately every 450 m.

As a result, operations on the busy route were not affected during the construction period. In addition, the old tunnel will in future serve as a safety facility when the new tunnel is completed as planned at the end of 2021.

In the run-up to the construction work, which began in 2014, there were, among other things, dyeing tests on numerous bodies of water on the mountain. The aim was to identify the water flow.

A total of around 250,000 m³ of rock was extracted from the Albula massif. Most of it will go into the cladding of the new tunnel, for example. Useless material is transported to a landfill site not far from Preda and then reintroduced into the landscape.

Incidentally, the tunnel is being driven from both ends simultaneously. The breakthrough was on October 02, 2018, and the project has a total budget of 345 million Swiss Francs.

As is customary for such large-scale projects, the Rhaetian Railway is engaged in extensive public relations work. This includes inviting the media to special events, such as when the Preda station was moved 112 cm. In the same way, there is an “Infoarena Tunnel Construction”: this is a striking red construction site wall along a train, where you can learn interesting facts about geology, tunnel technology or construction logistics in German and English.

For the children, the mole Kobali is there, and there are regular guided tours or blasting sessions. 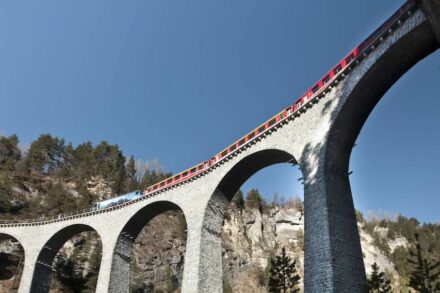 By the way, we must not withhold it from our readers: on the parts of the railway line from Chur to Tirano with the famous viaducts and tunnel loops, not only the Glacier and Bernina Express run, but in winter also the so-called sleigh trains. These are the commuter trains between Bergün (1367 m above sea level) and Preda (1789 m): the car track is prepared for sleighs in winter, so that you have a fantastic descent to Bergün and from there you can take the train right back to the start of the track in Preda.