James Brunt: Land-Art with wonderful geometries from small elements of nature such as leaves, sticks and stones 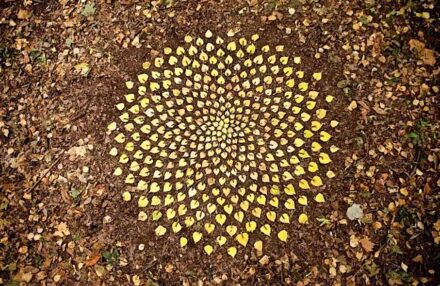 We had thought it up so cleverly: we wanted to get to the bottom of the Land Art of the English artist James Brunt and sent him the question why geometry played such a big role in his work and whether he had perhaps studied mathematics before studying Fine Art at the Byam Shaw School of Art in London. The answer turned out to be very dry: No, his works of art were not inspired by ideas from geometry, but by the material lying around in a place. 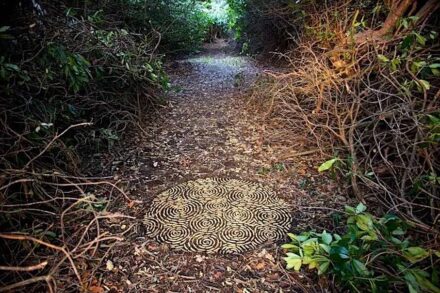 James Brunt combines leaves, branches, wooden sticks or even stones to create surprising arrangements. He likes to lay them out on paths – he doesn’t want to go into the undergrowth and mix things up there, he writes. So, what he composes, as already mentioned, results from what he is offered on the spot.

Sometimes there are arrangements like the one in the photo on top, in which we saw a sunflower. It had given us the idea that Brunt had used mathematics to bring the curvature of the lines (mathematically: Fibonacci Spirals) and the color gradient of the leaves to the ground. 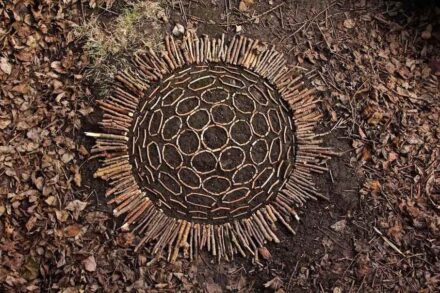 Whereby, and now we want to come along as know-it-alls, with these arrangements on this photo he naturally had the famous graphics of Victor Vasarely in mind, which belong to the cultural common property of our time and which everybody knows. 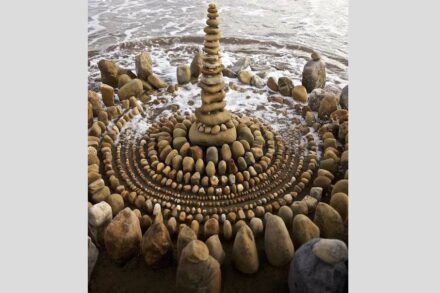 James Brunt’s works only survive as photographs. The arrangements of the leaves disappear as soon as the wind blows through them; the stacks or circles of stones by the sea clear away the tide after a while. But he captures them with photographs, which he sells.

It is fascinating how he brings out the beauty of nature with his unobtrusive arrangements: Rarely have you seen the leaves of autumn with such vivid colors, and yet they are lying around everywhere at the end of the growing season every year. Occasionally Brunt carries scissors with him, with which he cuts out shapes from the leaves. 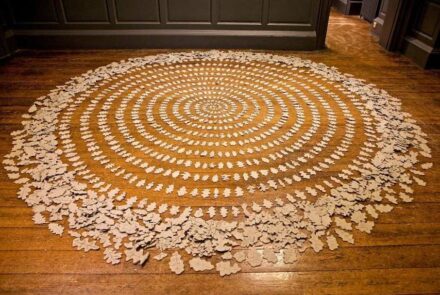 He has also already formed leaves in clay and arranged his own circles from them.

In doing so, he operates in fascinating field between restraint and decisive avant-guarde. On the one hand, he tries not to upset the existing place with his work. On the other hand, however, he uninhibitedly inserts his work into the situation on site, for example when he extends the roots of a tree with sticks to form spider webs or draws his lines between trees. 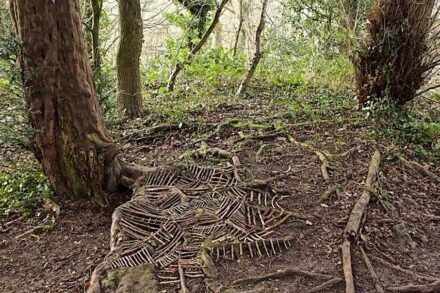 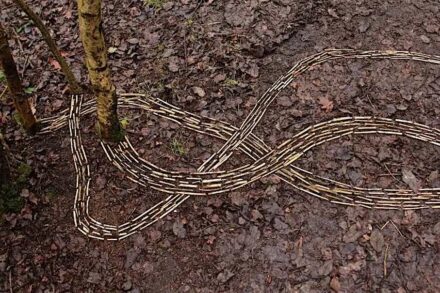 James Brunt’s webpage is a bit disorganized, we want to warn our readers and we had written to him. He did not really want to deal with such technical topics, he had replied.

We recommend:
* if you want to read James Brunt’s “Code of Practice” with some remarks about his self-conception as an artist, you will find the short text in the section “Works”,
* if you want to have a look at the works, however, it is best to browse through the “Blog”. 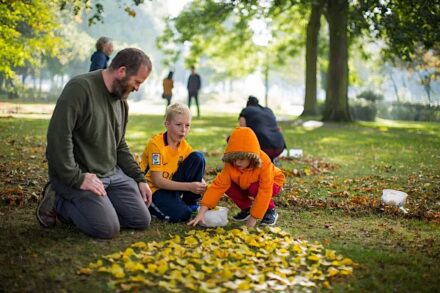