The town hall square in Umeå, Sweden, is a hub for pedestrian traffic and invites passers-by to pause and explore with nature attractions 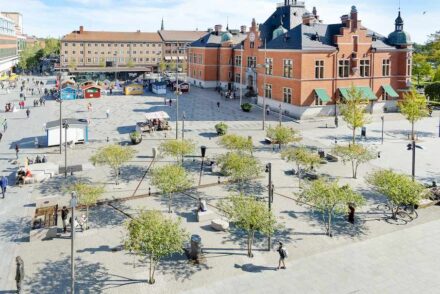 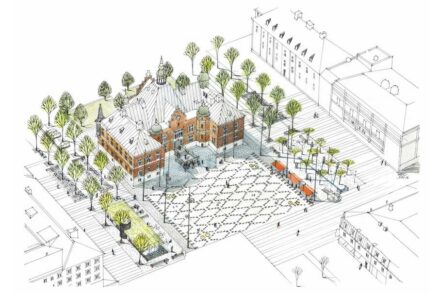 There is a worldwide effort to get car traffic and parking out of city centers and thus return the centers to the citizens. The Swedish city of Umeå is also pursuing this goal with numerous redesigned streets and squares – on Town Hall Square, landscape architect Professor Thorbjörn Andersson and the Sweco company have, so to speak, knitted the design with exceptionally fine needles.

One of the aims was to link up certain areas around the representative brick town hall, such as the park behind it with the pedestrian zone in front of it.

For this purpose, the park virtually reaches with 2 green arms around the city hall to the pedestrian zone Kungsgatan running in front of it.

What is unusual is the design of these green arms: they do not consist on a lawn in the style of a park but are covered with trees. There will be more to say about them further down.

As was said, the overall aim of the project was to give the city more space for pedestrians. The stationary traffic was an important topic, here: the pausing and lingering of passers-by.

Thorbjörn Andersson wanted to give the town hall square “something to discover”, as he puts it. It is nature in a broader sense that he offers: the already mentioned trees and natural stone on the ground.

It is worth looking at the details in both.

To the trees, let us look back a little: when the town was rebuilt after the catastrophic fire in 1888, the citizens decided to widen the streets with birch trees. This was implemented so consistently that Umeå is commonly called “björkarnas stad” (city of birch trees).

During the current redesign, there was of course the question of the types of trees to be planted on both sides of the town hall – but the citizens really had enough birch trees!

So, the landscape designers around Thorbjörn Andersson had a free hand, and now it is important to know that the professor from the Swedish University of Applied Sciences in Ultuna is aiming for “diversity” in his planning, as he says.

One of the green arms is planted with maple trees. In autumn they offer a week-long spectacle of as their leaves change color. 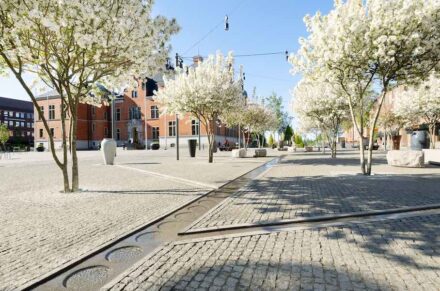 The green arm on the other side is covered with apple trees. “Fruit trees?” we asked him in our talk, “are they representative enough for a town hall square?”

Andersson speaks of a “wow-effect” they would give the square: “In spring you can experience the sea of fruit blossoms here in town, just like in the country.”

But apple trees in Sweden’s north? They have found a variety in Germany that can withstand the climate, Andersson says.

And now the best thing about nature: the mosaic pavement made of different types of granite right in front of the town hall is beautiful. It has the pattern of the “Västerbotten” textiles known from thick winter sweaters. 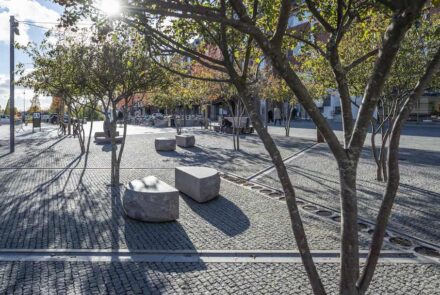 Quite inconspicuously, under the apple trees, there is another jewel of urban design: there, flat channels run through the paving. They are a playground for the children and watering places for the animals. 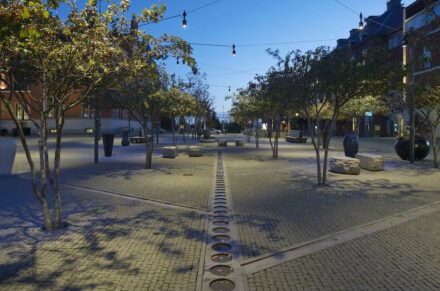 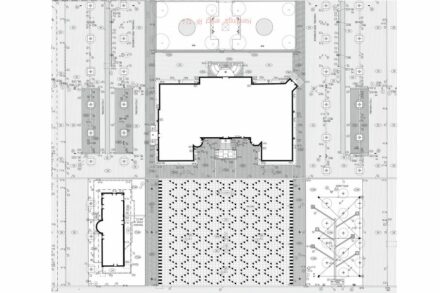 From the bird’s-eye view you can see the water flow: the channels remind a little bit of a tree with branches, and at the end of each branch there is a thick boulder from which the water flows out. 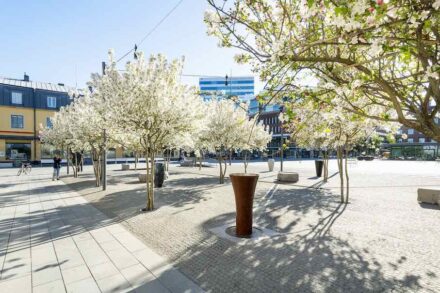 The artist Pål Svensson calls these fountains he has designed “amphorae”. Their material is different kinds of granite, which are found in Sweden, Norway and Finland: Bohus granite, Hallandsgnejs, Diabas, Dark Labrador, Tranås Rubin and Ice Green. There is also a drinking fountain in the form of a stylized flower made of Bohuslänsk Gnejs.

With this arrangement Andersson wanted to bring those magnificent fountains known from southern Europe to the north – but at the same time avoid having to switch them off in winter and “then look so sad”, as he puts it. The amphorae, on the other hand, can run for longer and are also somewhat reminiscent of glasses of champagne.

Moreover, “the water running down them highlights the color of the stone they are made of.”

The square is used all year round for market days or events. In winter, sometimes an ice labyrinth is built.