Researchers from Hanover, Germany have proven that an earthly imitation of Regolith can be liquefied by laser / Tests on the moon with real material planned for 2021

International space agencies and companies are not only planning to further explore, but to colonize space. The moon is of great importance as a research station and starting point for further expeditions. However, the cost of transports are enormous – a kilogram of loading capacity costs approximately 700,000 Euros. Therefore, infrastructure, components, and devices, etc., would at best be manufactured directly on the Earth’s satellite.

This is where the “Moonrise” technology comes in: “We want to bring a laser system to the moon, which is supposed to melt moon dust, the so-called regolith. We would thus take the first step to take Additive Manufacturing, that is 3D printing, to the moon, “explains Niklas Gerdes from the Laser Center Hannover (LZH). In that way, together with scientists from the Institute of Space Systems (IRAS) of the Technical University Braunschweig, he wants to prove the following: A laser system that weighs no more than 3 kilograms and has the volume of a large juice package can melt down local raw materials on the moon and convert them into versatile structures later.

The opportunity to fly the technology to the moon in 2021 with the first moon mission of the New-Space company PTScientists offers the researchers from Lower Saxony the unique opportunity to test their pioneering technology under real conditions.
Specifically, the scientists from Braunschweig and Hannover want to melt regolith on the lunar surface in a controlled manner using their laser system. After cooling, it is a solid body suitable, for example, as a building material for the “Moon Village”, the vision of the global village on the moon as an outpost in space. 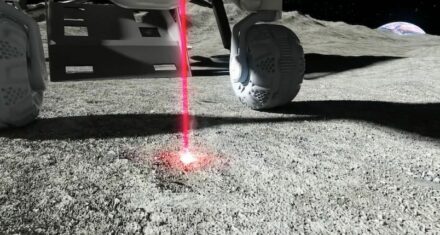 The Moonrise project has been running for almost 9 months. Tests in the so-called Einstein elevator under microgravity have shown that the laser is, in principle, capable of melting the regolith imitation under moon conditions.

Also, other results of the tests were promising: The laboratory setup is adapted, suitable laser hardware identified and tested, the optics designed and tested. The material that the scientists produce and use for the tests is becoming more and more similar to the real regolith on the moon.

The are currently working on adapting the laser to the lunar vehicle’s load compartment. The laser is integrated into a tunnel at the bottom of the rover.

After the adjustments, the entire system is tested for its space suitability: because on the way to the moon, the laser system must withstand shocks and massive temperature differences.