Central Park has its first monument depicting “real” women (and persons of color) to commemorate the ratification-centennial of the Amendment, which gave women the right to vote 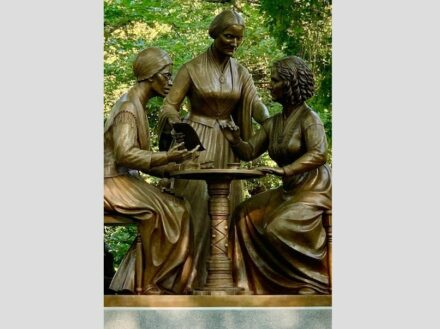 Stone-Ideas.com usually only reports about topics which have something to do with natural stone. But somethimes there are news which go far beyond marble and granite:

Consisting of bronze figures of Sojourner Truth, Susan B. Anthony, and Elizabeth Cady Stanton, the Women’s Rights Pioneers Monument commemorates the centennial of the ratification of the 19th Amendment, which gave women the right to vote. Sponsored by the group Monumental Women and unveiled in August 2020, the monument is the first to be added to Central Park since 1965, the first since the Park became a landmark, and the first in the Park to depict actual women.

Sculptor Meredith Bergmann shows the 3 women as activists at work: Sojourner Truth speaking, Susan B. Anthony organizing, and Elizabeth Cady Stanton writing. These visionaries (all of whom were New Yorkers) join William Shakespeare, Robert Burns, Sir Walter Scott, and Fitz-Greene Halleck on the southern end of the Mall.

Currently there are 23 statues of real men in Central Park; women were “represented” only through fictional characters like Alice in Wonderland, Mother Goose, and Juliet (with Romeo).