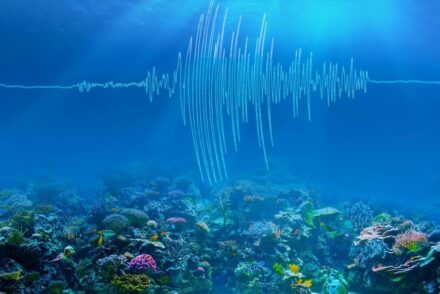 When an earthquake happens under the ocean, most of its energy travels through the seafloor and the earth‘s crust, but a portion is transmitted into the water as sound. These sound waves propagate outward from the quake’s epicenter just like seismic, but the sound waves move at a much slower speed. As a result, ground waves will arrive at a monitoring station first, the sound waves following later like the thunder after a flash from lightning in the atmosphere.

“The key is that we use repeating earthquakes – quakes that happen again and again in the same place,“ Wenbo Wu says, postdoctoral scholar in geophysics at Caltech and lead author of the study published in Science. “In this example we’re looking at earthquakes that occur off Sumatra in Indonesia, and we measure when they arrive in the central Indian ocean.“

It takes about a half-hour for them to travel that distance, with water temperature causing about a one-tenth-of-a second difference. It’s a very small fractional change, but it can be measured.

“The ocean plays a key role in the rate that the climate is changing,“ according to Jörn Callies, assistant professor of environmental science and engineering at Caltech and study co-author. “The ocean is the main reservoir of energy in the climate system, and the deep sea, in particular, is important to monitor. One advantage of our method is that the sound waves sample depths below 2,000 m, where there are very few conventional measurements.“

Depending on which set of previous data, they compare their results to, ocean warming appears to be as much as 69% greater than believed. However, Callies cautions against drawing any immediate conclusions, as more data need to be collected and analyzed.

Because undersea earthquakes happen all over the world, Callies says it should be possible to expand the system he and his fellow researchers developed so that it can monitor water temperatures in all of the oceans. Wu adds that because the technique makes use of existing infrastructure and equipment, it is relatively low-cost.