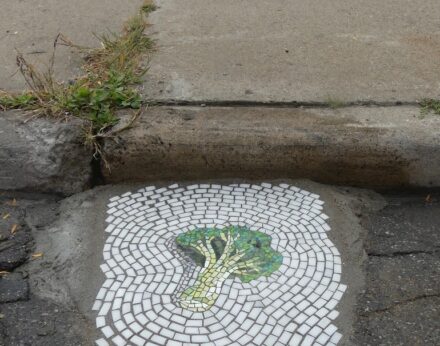 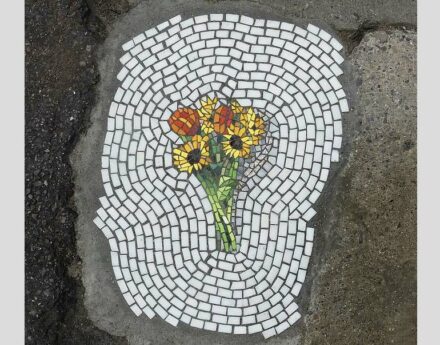 Jim Bachor found the inspiration for his art during excavations in Pompeii and later, on his doorstep in Chicago

Some people may simply be happy about the unusual ideas, others note with joyful irony that someone has finally taken care of the condition of a road: Jim Bachor fills the asphalt holes in some places in the USA with his mosaics and drives his street art so far that, after he has let the concrete harden one night, he comes back the next day and removes the cement veil by hand.

There is a lot of artistic anarchy in his actions, and Bachor has not always announced to the city council that he wants to take away the emptiness from a certain hole in their asphalt. In any case, the power of the red traffic cones with which he secures his “construction site” is reliable: the cars obediently drive around and let him fill the asphalt.

Bachor discovered his enthusiasm for mosaics as an intern at an excavation in ancient Pompeii. What fascinated him was that the little stones had survived for 2000 years and that through many of them everyday situations of that time were elevated to the rank of eternity.

On his webpage he outlines his artistic concept in a few words: “Trying to leave your mark in this world fascinates me. Ancient history fascinates me.”

But the fact that many of his small works of art are damaged or even destroyed by the rushing traffic seems to leave him cold. “Gone” he succinctly notes on his webpage to many of his mosaics.

Perhaps that the loss of one work only inspires him to create the next. 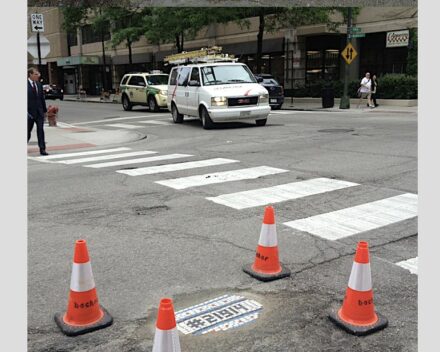 The repertoire of his motifs is endless: it ranges from broccoli and bouquets of flowers to simple numbers that name the respective work…, 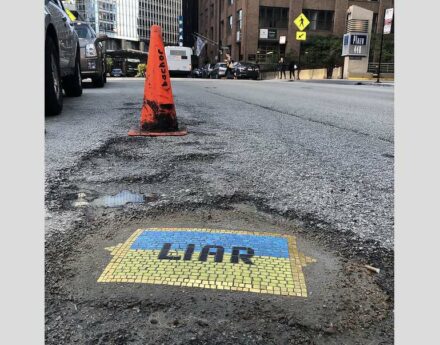 … others almost shout something to the passers-by.

Bachor works like the classical mosaic artists: marble and glass (ceramics) are his materials, and he uses tongs to give them the shapes he needs. In the cellar of the house where he lives he uses them to assemble the mosaics, stabilizes them with a net and then it’s off to the pothole of the day.

It is meticulously cleaned, filled with concrete, the mosaic is placed on it, warm water helps the concrete to harden. Finally, he carefully lifts the net and cleans the picture until it shines.

While, as it seems to us, every motif is suitable for Bachor’s Street-Art, there are certain initial conditions attached to a hole: it must not be too big, but also not too small, and its edges need stability.

Perhaps the selected holes will even rejoice when Bachor approaches them with sand, cement, water and a mosaic inlay, perhaps even giving them a sense of purpose.

The little stones (tesserae) are larger than usual for mosaics. Another special feature is that the joints are comparatively large. This is necessary so that the concrete used as a binder can completely surround the particles.

As a mosaic artist he can do much more than just such take snapshots of the present. It is worth a look at his commissioned works presented on his website. 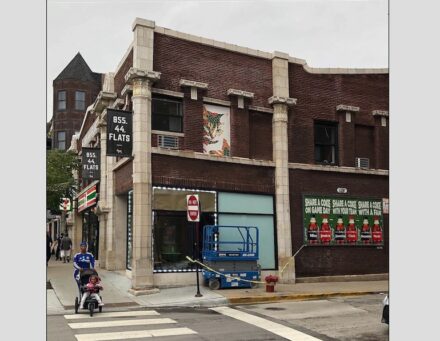 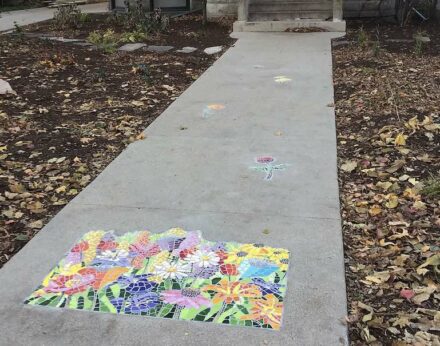 We especially liked the head of a cat looking down from the first floor of a house, or the “Librarian’s Garden” for someone who liked plants and books.

Long is the list of press reports and videos that he makes available on his website: he came to his art when there was a hole in the asphalt in front of his Chicago home; elsewhere he once gave an interview to a newspaper about a finished work, and then the city council came and tore the mosaic out again; in Finland, where a gallery couple had invited him, his work was carefully removed and then carefully put back into the asphalt during a later renewal of the street surface. 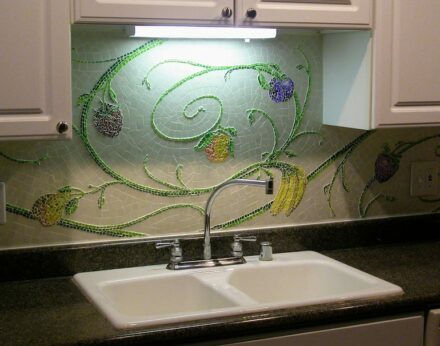 We would like to point out his work “Artsplash” (as a variation of backsplash – splash guard): who wouldn’t have fun doing the dishes with something like that?

Photos of his work can be bought on the webpage. 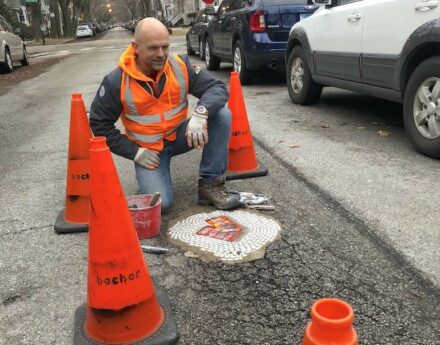