BAU München from January 13 to 15, 2021: an innovative concept for a “hybrid“ fair adapted to the times of Corona

A small in-person part of the fair will take place in the Congress Center and in up to 2 exhibition halls, everything else will have to switch to the online presentation

The BAU fair 2021 in Munich, Germany, from January 13 to 15 will have a significantly different appearance than in previous years: the new “hybrid format comprises an additional digital offering for exhibitors and visitors,“ the organizer informs in a press release. The in-person part of the event will take place in the “International Congress Center Munich (ICM, at the edge of the exhibition grounds) and in up to 2 exhibition halls,“ where there will be exhibitor stands, forums, and special shows.

This means, clearly speaking: the well-known event, which most recently comprised 18 halls and 200,000 m² of space and lasted 2 days longer, will be being rigorously downsized. This is an innovative idea; on the other hand, the concept for the digital part of the trade fair is the same as known from many events in 2020: there are online lectures and discussions as live streams or as recorded videos. Companies have the opportunity to present their products online in their own sessions. Networking modules are available for business initiation. “Integrating the traditional BAU info talks into the hybrid format is also being considered,“ as said in the press release. 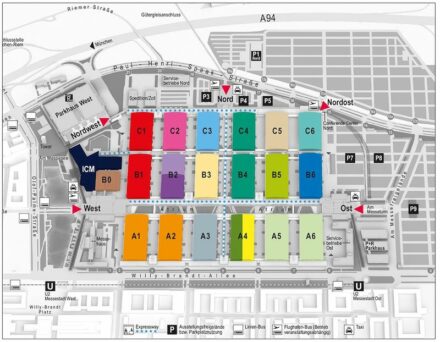 It will be interesting to see which exhibitors will get access to the in-person part of the fair. “Exhibitors who had already firmly booked their stand for the conventional in-person trade fair can still present themselves on site,“ the organizer writes, “other exhibitors who have already cancelled can reconsider their participation, whether digital or on site, under the new conditions.“

Details of the new format and “Information on participation options“ will be available from October.

In January 2023, the trade fair company hopes that the two-year BAU will once again take place entirely in real: “Almost all well-known exhibitors who are absent due to the Corona pandemic 2021 have already announced their participation for the next event in January 2023,“ as stated in the press release.

However, the digital version will then also be part of the event.

BAU takes place every 2 years and is considered the leading trade fair for the construction industry. In 2019, it had 2,250 exhibitors from 45 countries and more than 250,000 visitors, 85,000 of whom came from all over the world.