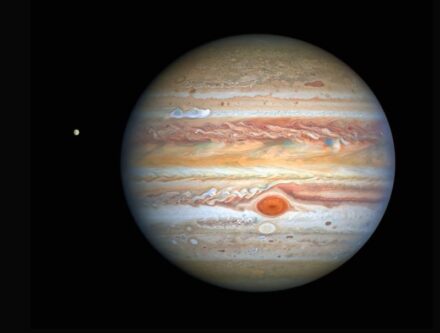 This image of Jupiter, taken by the NASA/ESA Hubble Space Telescope on August 25, 2020, was captured when the planet was 653 million km from Earth. The Great Red Spot, rolling counterclockwise in the planet’s southern hemisphere, has an exceptionally rich red colour, with its core and outermost band appearing deeper red. It now measures about 15,800 km across, big enough to swallow the Earth. The super-storm is still shrinking, the reason is a complete mystery. Jupiter’s icy moon Europa is visible to the left of the gas giant.

The story of the Stony Creek pink granite used e.g. in the Grand Central Terminal in New York City and its quarry in Branford, Connecticut is told on a webpage.

In Portugal’s capital Lisbon and in Porto de Mós will be installed new examples for the country’s famous street paving, the Calçada Portuguesa, paying tribute to “the heros who fought against Covid-19”, a webpage of the company Roc2c informs. Works were due to begin in October 2020 (Portuguese).

The production of cement accounts for 6-8% of the worldwide emissions of CO2 from human sources. Material scientists from the Swiss Empa are working on recipes for eco-friendly variants of this important building material.

The Mutual Art magazine has published a report about British sculptor Barbara Hepworth and her life.

In Venice, the Royal Gardens (Giardini Reali) have been restored and are open again. Although located next to St. Mark’s Square, they are little known to the tourists.