Economical recovery before the second lockdown: in the 3rd quarter of 2020, GDP in the European Union had a growth by +12.1% 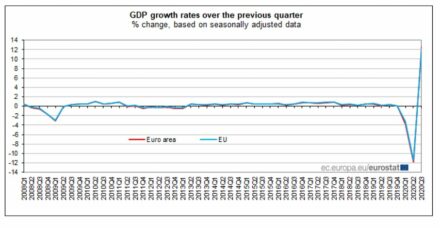 But compared with the same quarter of the previous year, it was -3.9%, according to a Eurostat

These preliminary GDP flash estimates are based on data sources that are incomplete and subject to further revisions.

Compared with the same quarter of the previous year, seasonally adjusted GDP has however decreased by (-)4.3% in the Euro area and by (-)3.9% in the EU in the third quarter of 2020, which represents a partial recovery after -14.8% and -13.9% respectively in the previous quarter. 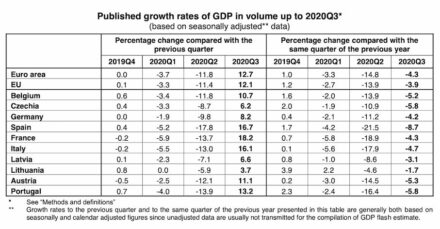 Among the Member States of the European Union, for which data are available for the third quarter 2020, France (+18.2%) recorded the highest increase compared to the previous quarter, followed by Spain(+16.7%) and Italy(+16.1%). Lithuania(+3.7%), Czechia (+6.2%) and Latvia (+6.6%) recorded the lowest increases. While a rebound was observed for all publishing countries compared to the second quarter, the year on year growth rates were still negative.