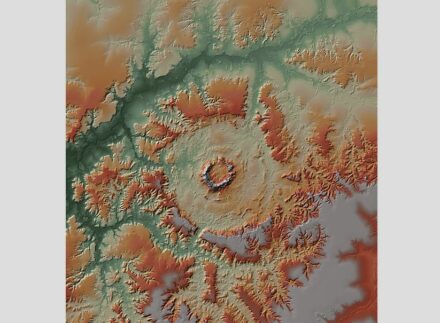 Impact cratering is one of the fundamental processes in the solar system and, with all certainty, beyond. This process played a major role when the planets and their moons began to form from the protoplanetary disk and throughout planetary evolution since then. Between 2010 and 2016, the German TanDEM-X radar X-band mission, operated and managed by the German Aerospace Center (DLR), generated the first global space-borne terrestrial digital elevation model of high resolution, based on Synthetic Aperture Radar interferometric measurements. Now, these data were used to create the first topographic atlas of all currently confirmed terrestrial impact structures.

The book ins 2 volumes descirbes the basic principles of impact cratering, of radar remote sensing, and of the TanDEM-X mission. It informs about more than 200 terrestrial impact sites in high-resolution topographic maps and satellite images, complete with detailed geological descriptions and photographs of the crater structures and their rocks. The scientists also explain the essential details of each impact event – fortunately millions of years ago.
Thus, the atlas provides a comprehensive overview of the impact crater record for each continent.

Lunar and interplanetary spaceflight over the past 50 years has provided us with detailed maps of the old, impact-crater covered surfaces of our Solar System neighbors. For Earth, the global impact crater record only represents a fraction of the bombardment that our planet has had to endure. Tectonic activity, erosion and weathering, and post-impact burial under sedimentary covers have erased most of the terrestrial impact history. Many of the remaining recognized crater structures have either been modified almost beyond recognition, or are buried entirely.

Mapping what is left of the terrestrial impact record from a satellite platform in low-earth orbit is often obscured by dense clouds and dust-laden air layers in our atmosphere; or even the lack of solar illumination prevents us from seeing the bare ground. Remote sensing methods developed in the past decades have given us tools to tackle the challenge of mapping the Earth’s surface with high precision.

The formation of craters by asteroid and comet impact has always been a fundamental process in the solar system. As the planets developed along with their moons, these impacts played an important part in accreting planetary mass, shaping the planetary bodies‘ surfaces, and later also influencing their development. And larger meteorite impacts eventually affected the evolution of life on Earth.