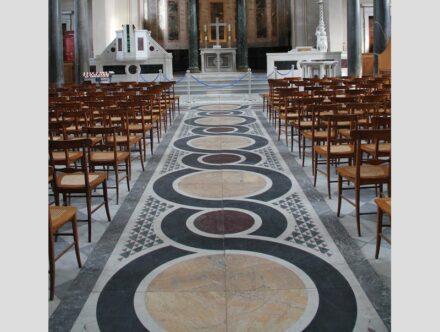 The Friedenskirche (Peace Church) in Potsdam’s Park Sanssouci is an example for Europe’s 19th century’s love for Italian architecture. Inside, it has a famous marble mosaic floor. Yet the structure of the building urgently needs restoration. The German Foundation for Monument Protection (Deutsche Stiftung Denkmalschutz) calls for sponsors.

Sarcophagi for embalmed deceased were a lucrative business in ancient Egypt. This was proven by finds of about 100 such wooden coffins near the step pyramid of Saqqara. Because not only pharaohs were embalmed, but also higher officials and rich people, Late Period and the Ptolemaic period.

Fires were a permanent threat to the European cities before massive building in stone, brick became normal. Now, an experiment in South Africa showed how now shack fires destroy informal settlements with an incredible speed.

The Millstone Park (Kvernsteinparken) in Hyllestad, Norway, is an outdoor museum in the largest stone quarry landscape from the Viking period and Middle Ages in Northern Europe.

The International Labour Organisation (ILO) has commissioned a study about natural stone mining in Rajasthan to respond to the growing demand of stone while providing social security benefits and healthy working conditions.

A new collection of everyday-objects in Pietra Leccese limestone was created by the designers from apospersano studio for Pimar company (Italian 1, 2).

It is thought that over 1,000 kilograms of so-called interplanetary dust falls to Earth every day, coming from meteors, discarded remnants of asteroids and comets that pass by the Earth. Astronomers now combine radar and optical observations to measure those particles.

Vibrations travel through our the Earth’s crust and the oceans in the form of waves, resulting from earthquakes, volcanoes, wind-driven ocean storms, and human activity. Scientists now can even register the so called love waves from the ocean floor.

Video of the Month: „Facing the Unknown in Ancient Mesopotamia” is a video by the Metropolitan Museum of Art (MET) where a curator talks about how people in the ancient world coped with the uncertainty of illness, natural disasters, and war.