Despite Covid-19: a (virtual) visit to Michelangelo’s David in Florence 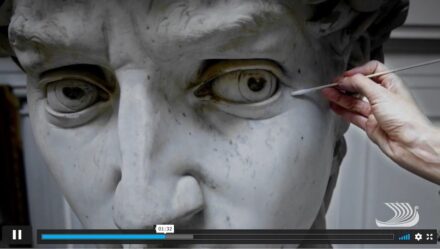 On the webpage of the Galleria dell’Accadmia in Florence, one can take a selfie with the sculpture in the background

The most famous marble sculpture is “David“ created by Italian sculptor Michelangelo Buonarotti (1475-1564) during 3 years with hammer, chisel, and polishing tools. It depicts a scene from the Bible: the young David meets the dreaded giant Goliath and, the whole world knows the story, will defeat him with a stone from his sling.

Michelangelo has chosen a particular moment from the fight, quite unusual at the time: he shows the future hero before the clash with the overpowering opponent. David’s posture and facial expression show the inner tension, determination, but also uncertainty about what is to come.

To depict a, so to speak, “star“ in this way was unusual for the Renaissance style. It was based on antiquity that is on the heroic figures from ancient Greece and Rome: statues used to be dedicated to persons when they had won a battle or when they had given outstanding service to the state.

The statue is made of a single monumental block of Carrara marble of the Statuario type. It is a good 5 m high and weighs around 6 tons.

The stone’s special feature contributes to the fascination of the statue: the uppermost layers of the surface allow light to pass through, giving it a fine shimmer that is reminiscent of human skin in sunshine.

The sculpture is the attraction in the Galleria dell’Accademia in Florence. On the museum‘s website, one can take a virtual selfie with the sculpture in the background or fill up a historic postcard to post it on Facebook.

The restoration of the statue 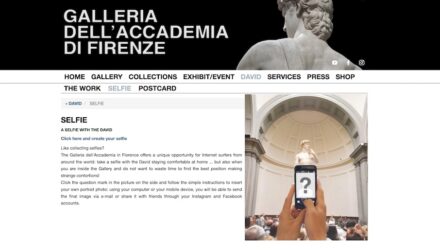