“Piscina Monolitica”: a bath fountain in steep terrain in Niederuzwil in Switzerland 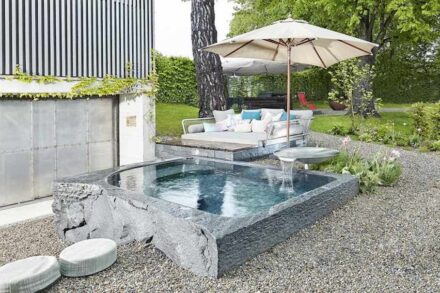 The owner of a private house in the village of Niederuzwil in the canton of Sankt Gallen in Switzerland ordered a bath fountain from the natural stone company Alfredo Polti. It is a massive boulder from which a tub shape was carved. “Piscina Monolitica” is the title. 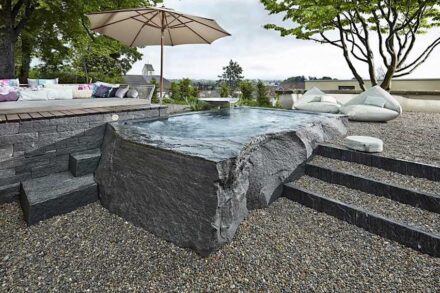 The stone block made of massive Calanca gneiss also serves to design the plot of land, which is located in a residential area on a slope: it enlarges, so to speak, the flat surface of the garden by the size of the pool. Moreover: the view from the pool to the horizon could not be better. 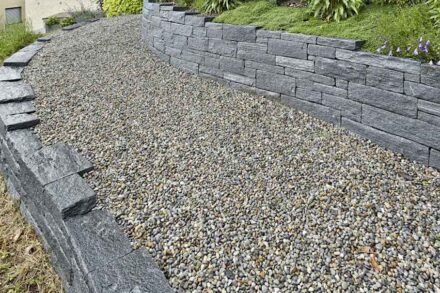 Other walls in the area were also built from the Calanca gneiss.

A word about the community of Uzwil and its location in the Swiss mountains: the people there appreciate massive volumes and fear the violence of water. For after devastating floods in 1664, 1778, 1876 and 1938, there was another sultry summer’s day with scorching heat on June 27, 1970, which was followed by a storm in the afternoon. For about 2.5 hours, a thunderstorm with hail pelted down from the sky, and the otherwise picturesque Uze, together with its tributaries, not only burst its banks, but caused total destruction in the villages.

The official measures taken by the authorities to keep the stream in check even in such a century old storm are considered to be groundbreaking. One of them is an overflow tunnel through the mountains, which can drain the flood water of the Uze into a river. This river has a different catchment area and will therefore probably not flood at the same time as the Uze. Another of the measures is that the upper reaches of the Uze were rebuilt and widened in a natural way.

Video of the Piscina Monolitica 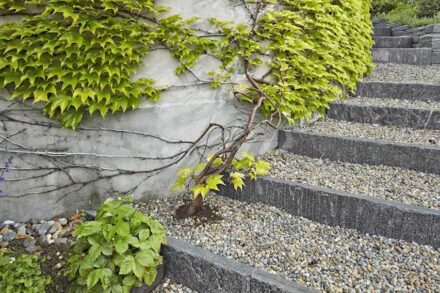 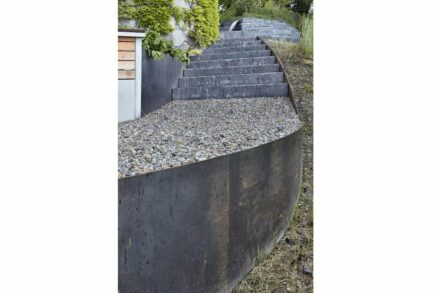