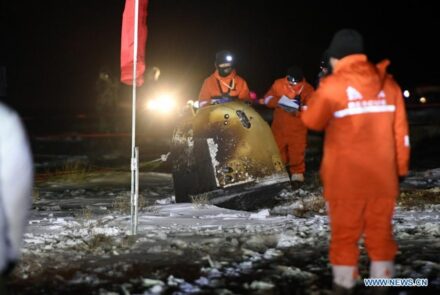 The basaltic lunar mare material is about 1,21 billion years old, much younger than the probes from the Apollo missions with between 3.1 and 4.4 billion years

China has taken an important step in its Lunar Exploration Program: on December 16, 2021, the robotic spacecraft Chang’e 5 returned to Earth with stone samples collected and drilled from the moon’s surface. The capsule landed in Siziwang Banner of the Inner Mongolia autonomous region at 1:59 am after it had been launched to the moon on November 24, 2021, by a Long March 5 heavy-lift carrier rocket from the Wenchang Space Launch Center in Hainan province

“The landing site on the moon was near Mons Rümker, an isolated volcanic formation located in the Oceanus Procellarum, or the Ocean of Storms, on the western edge of the moon’s near side. The area had never been visited before Chang’e 5,“ China Daily reported. “Shortly after landing, the combination began to fulfill its major tasks of using a drill to obtain 500 grams of underground samples and then using a mechanical arm to scoop up 1.5 kg of surface soil. Collection operations finished on December 2, taking about 19 hours, which was much quicker than expected. Samples were packed into a vacuum container inside the ascender.“

Previous spectroscopic analysis had revealed that the typical basaltic lunar mare material was to be expected at the landing site. The samples were formed about 1.21 billion years ago and are much younger then those collected by the Apollo missions that had between 3.1 and 4.4 billion years. It is hoped that the comparison will help scientists to better calibrate “the techniques for estimating the ages of geological surfaces on planets, moons, and asteroids throughout the Solar System,“ as said on Wikipedia.

The samples were packed into a vacuum container inside the ascender of Chang’e 5. Then followed the restart – it was the first time that a Chinese spacecraft blasted off from an extraterrestrial body.

The ascender linked up with the orbiting combination where the samples were transferred into the reentry capsule. Finally, it was separated from the combination and was commanded to impact on the moon.

With this success, China is the third country which brought a spacecraft back from the moon, together with the US and Russia.

Funny stories:
* After the landing on earth, a video clip of a small animal passing the probe went viral online, China Daily reports. Quite a few internet users left comments such as “So cute! Is it Chang’e’s pet Yutu?” In ancient Chinese mythology, Yutu is the white pet rabbit of the lunar goddess Chang’e.
https://global.chinadaily.com.cn/a/202012/17/WS5fdb215da31024ad0ba9c746.html

* Part of the search team for the return capsule was a cavalry militia of 20 men and horses. China Daily shows photos of the men in a snow storm at daytime. “Before the landing, they had drilled around the landing site for more than 10 days, where the local temperature can easily reach-25 C,“ is said. The landing was completed at 2 am in the darkest night.
https://global.chinadaily.com.cn/a/202012/18/WS5fdbf9d1a31024ad0ba9c864.html