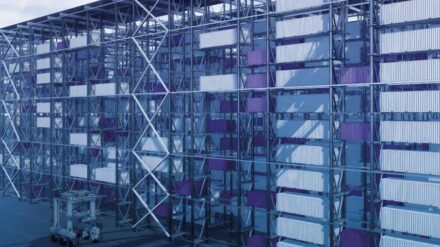 The joint venture of the German SMS group and DP World from Dubai has a high-bay warehouse at its core, with direct access to each individual transport box

Boxbay is the name of a new system for storing and handling containers in port terminals. The procedure is easy to explain, because it combines different well-known techniques: it is basically a high-bay warehouse in which the containers are placed by machine. The system always knows where a transport box is located so that the box can be removed and loaded onto the next ship, for example, faster than before.

The process was developed in a joint venture between the SMS group with headquarters in Düsseldorf, Germany and the logistics company DP World in Dubai. Both contributed their special know-how.

The previous weak points in container handling within a port were as follows: Normally, up to 6 of these steel boxes, some of which are 12 m long, are stacked on top of each other when they have been unloaded from a ship. As a result, these towers often have to be restacked when the next cargo is assembled for an outgoing ship.

The reason for this is again that space is very limited in the ports – which is why the
containers have to be stacked and cannot simply be placed next to each other. All in all, with Boxbay, three times as many containers could be stacked on the same floor as usual. 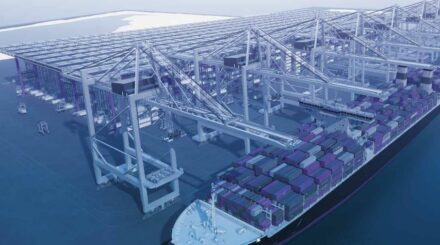 This often time-consuming rearranging collides with another fact: modern container gantry cranes – those long arms that protrude from the quay over the ship side by side and on which the cranes with the containers on hooks move back and forth – are now very fast and precise, but this does not match the slowness of assembling the cargo.

With Boxbay this can now be changed.

This high-bay warehouse has 11 levels – so almost twice as many containers fit on top of each other as in a normal stack. A shelf can be about 50 m high. The juxtaposition of the individual rows is very space-saving.

If you look at the details, you can see how clever the system is:
* Special lifting machines, called Stacker Cranes, lift and push the container to its place in the rack or remove it from there, from both sides of the rack;
* The container is transported to and from the rack at ground level by a railroad track, which drives the rack in a circle at its foot. It brings the transport crate to the respective transfer point: this can be a container bridge that lifts the crate over the ship and places it there, or it can be the loading station for further transport by truck or train;
* the whole system is designed for minimum material consumption: the racking places do not have floors, because they only need lateral guides on which the container is placed; the system is designed for standard containers 20 feet and 40 feet;
* the energy for the operation comes from solar cells on the roof of the system or is recovered when the boxes are brought down from their rack space (comparable to the braking of a subway);
* finally: the system does not need light because the computer controls everything – the container terminals in the large ports, which were once brightly lit at night, can work with the novel high-bay warehouse, at least in principle, in complete darkness. 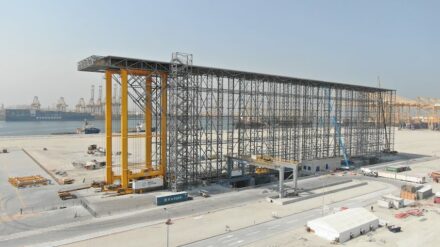 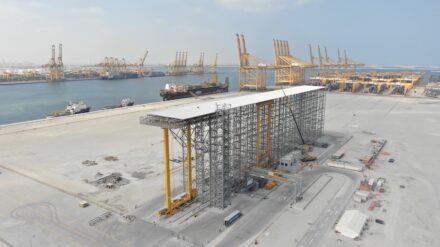 “Boxbay can increase the storage capacity in the container port by more than three times and the handling speed at the quay by more than 20%,“ according to SMS griup’s press release. Testing of a pilot facility at the Jebel Ali port terminal in Dubai began in September 2020.

As a reminder of the dimensions we’re talking about: the big ones among modern container ships transport almost 24,000 boxes in a single trip.