Kitchen in a residential house in Australia: the cooking area can be separated with a movable wall door 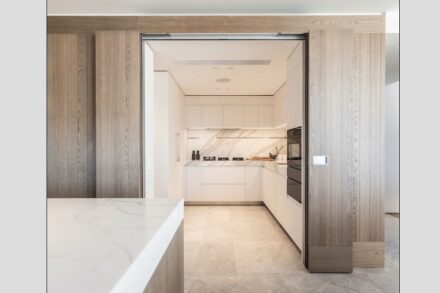 For some years now, the kitchen in an apartment has no longer been primarily understood as a workspace, but rather as a place for the cook’s creativity and the enjoyment of shared meals with guests. Behind this is the upgrading of the role of the person at the stove, which men now also enjoy, and a new kind of coziness. Strong extractor hoods have made such open kitchens possible.

The Italian brand Arclinea is now going one step further – or back again? Because its chief designer Antonio Citterio, who has already been awarded one of the prestigious Compasso d’Oro prizes, has designed a mixture of old and new for a private home in Sydney, Australia: the kitchen is divided into functional areas and a room-height wall as a door can separate them. 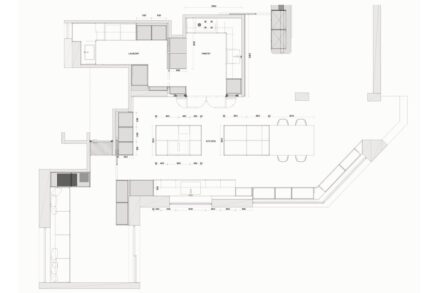 The kitchen ensemble has three parts in the house in Darling Point, a suburb of the port city with the famous opera house:
* The designers call the part with gas stove, oven, refrigerator, etc. “Pantry”. It is comparatively small – probably not to be understood as a further devaluation of kitchen activity, but rather as an effort to keep the distances there as short as possible;
* on the other hand, the spacious dining and living area, with 2 islands and, one is still in the kitchen, a hot plate, an oven and a sink;
* and separated from the “Galley” a room called “Laundry” for the washing machine. 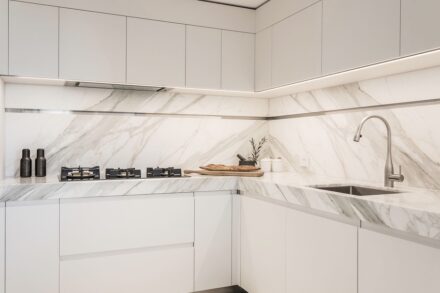 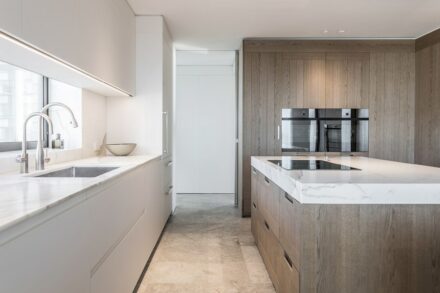 The whole is made up by the material: for the splash guard in the “Pantry”, for the worktop there as well as for the worktops in the dining room the marble Calacatta Gold was used. The slabs look different in thickness. The stone is uniformly polished.

A folding wall-high door with wood veneer separates the two zones. The same wood is also used for the kitchen islands. 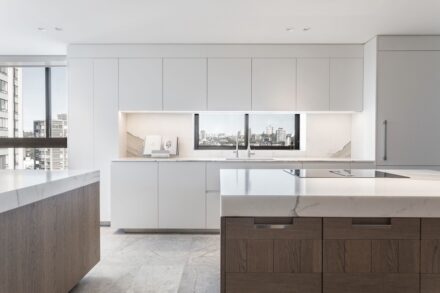 Otherwise, the walls are soberly designed with a white tone.

Arclinea is an Italian manufacturer of exclusive kitchens. The company was founded in 1925 and produces only in Italy, as it says on the webpage. The system of movable wooden walls (“Modus Door System”) was designed by Antonio Citterio.

The design of the kitchen in the residential house in Australia was done by the company Pure, which represents Italian manufacturers.