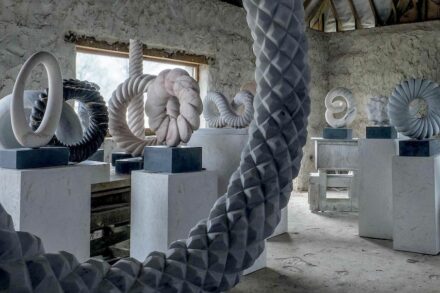 Even if the results seem weightless, for him the hard way of working on the stone is important and a prerequisite for his art

On William Peers’ webpage, the first thing you see is clouds of dust above a person in thick work clothes. But if you look at the works of the British sculptor, they are subtle, seemingly created without effort and with a surface as if of velvet.

Many are just lines that seem to twist and turn in space.

He responds to our question about this: Even if his works look “soft and clean“, the work as such is anything but. “The physical journey is everything to me. When the robot makes the sculpture for us the journey will have mostly died. The journey to me is what makes life worth living.“ 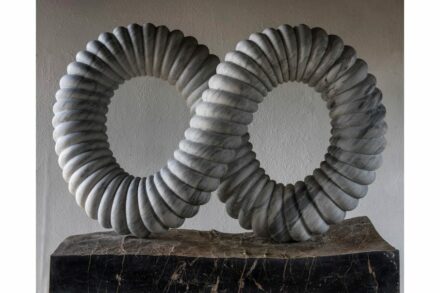 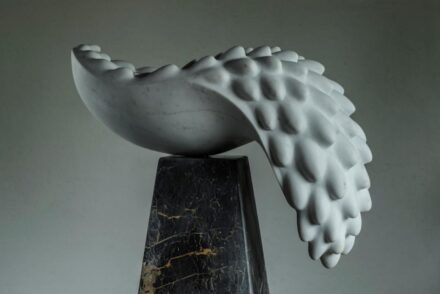 While he liked to work figuratively at the very beginning of his career, he is currently more interested in abstract forms, precisely the lines, as we put it. Recently, he has been pursuing a particular path: “I enjoy the moment when the block becomes forgotten,“ it says on the web page for the exhibition with the theme “A Line in Space“: “The marble whizzes off into space like a busy blue bottle fly, and yet it stands so still.“

He also created such forms for the exhibition “The Space Between“. They are “apparently weightless abstractions that belie the intensive labor and obsessive honing and shaping that gives them their impossibly clean curves.“ 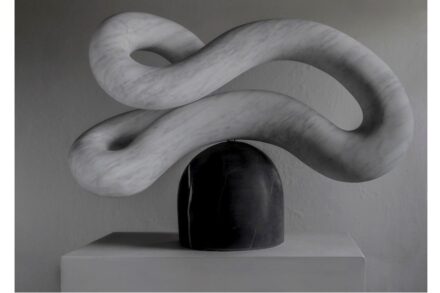 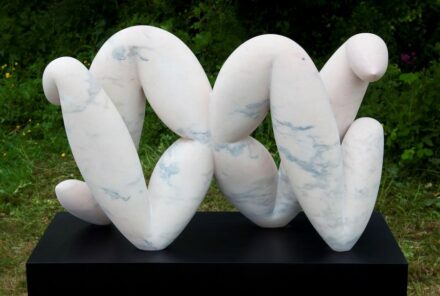 Marble is his preferred material. It is important in the selection of raw blocks that veins do not affect the strength of the material.

But it is not only the raw blocks that he chooses with great care. The pedestals on which the works are subsequently placed are also no longer simple cuboids. He also gives them rough surfaces as a contrast.

Peers studied at Falmouth Art College in Cornwall and later learned the finer points of artistic work on stone from the sculptor Michael Black. He then went to Carrara and later spent some time in Corsica, where he “found a tranquil retreat to work and develop the ideas.“

In 1990 he went back to Cornwall, where he has been working ever since. From there he participates in exhibitions or also makes orders.

Again, it is interesting to read on his webpage how precise and determined he describes how he envisions working with a client. One of the remarks there is that he is reluctant to copy his own works and prefers to realize new ideas. 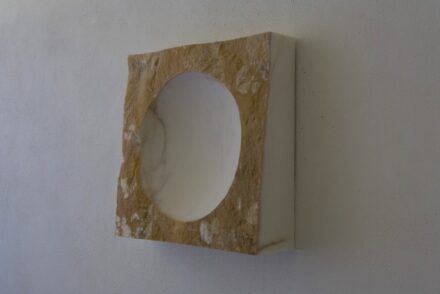 “I am a fast worker,“ he writes us in response to another question. This one was about his “100 Days: Sketched in Marble” project, during which he completed one work each day. 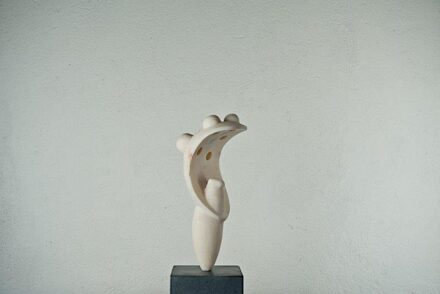 For him, resorting to the robot for this or, like other artists, working with assistants is out of the question. It would “put a block in the way of the intention being conveyed,“ he points out. 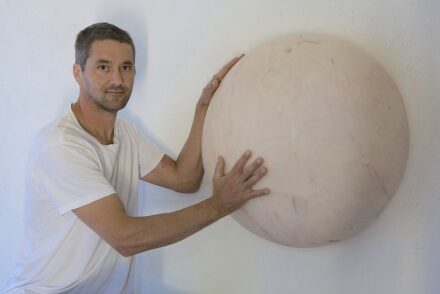