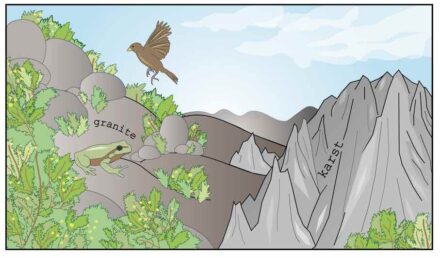 Areas with granites or sand and claystones have dense plant growth and high levels of animal diversity, limestone areas are less densely overgrown and home to species

Ever since the 18th century, scientists have known that the prevailing climate is a decisive factor when it comes to the wealth of animal and plant species in any specific area. However, climate differences can only explain about half of the variations in global biodiversity. The role played by different underlying rock types remains largely unclear. Now, Dr. Richard Ott of the GFZ German Research Center for Geosciences has now used a high-resolution map of the rock subsurface to investigate globally what effects the underground has on vegetation density, animal diversity as well as on the shape of landscapes.

In particular, it can be demonstrated that limestone areas are less densely overgrown and are home to a smaller number of amphibian, bird and mammal species. Areas where granites or sand and claystones predominate are likely to display dense plant growth and high levels of species diversity. The findings also show that the influence of climate on the average tilt angle of the landscape, i.e. Earth’s topography, appears to be less significant than some scientists have assumed to date. The study was recently published in the journal Geophysical Research Letters.

Rock properties have a decisive influence on the evolution of landscapes. The mineral composition and texture of a rock essentially determines the availability of water at the Earth’s surface, but also which nutrients enter an ecosystem and the pH-values of the soil formed on top. To investigate the influence of the rock type, Dr. Richard Ott has correlated global data sets. He used, amongst others, vegetation data from satellite images, as well as species diversity maps created by biologists. As the influence of rock type can be best seen on mountainous and hilly regions, he focuses his research on exactly such areas which account for about half of the land surface.

Dr. Richard Ott proves that areas with rocks that weather to clays during soil formation and, thus, retain water more efficiently – such as granites or claystones – usually have lush vegetation and a high species diversity. These are, amongst others, regions with plutonic rock and also so-called metamorphic rock, i.e. rocks that are mineralogically transformed deep in the Earth’s crust, under high pressure and temperatures.

Regions with predominantly calcareous rock are, on the other hand, usually drier, since the water drains away through fissures in the rock before it can be taken up by plants. The coastal mountains in Croatia or Greece are a good example of such regions. In these regions there are also often fewer nutrients, therefore the plant cover is less dense and the areas appear bare. Another characteristic is that such regions are home to fewer vertebrate species. Insufficient water availability can probably also explain why fewer amphibian species are found in such areas.

Furthermore, Ott’s global synthesis examines how bedrock properties influence the topography. Variations in hillslope and river steepness are used as a measure. Richard Ott validates for the global level what geologists have shown for smaller areas: Rocks that we consider hard, e.g. granites but also limestones, form slopes and riverbeds that are significantly steeper than those of softer rocks such as clays. These differences are caused by variations in the durability of the rocks. It was previously assumed that the erosion capacity of bedrock and the steepness of the slopes is also determined by the climate. However, Ott finds no concrete evidence for this assumption.

The study is part of a series of works that explore the relationships between geology and biology, such as, for example, Earth Shape. According to Dr. Richard Ott, it is vital “that biologists and geologists continue to collaborate in future in order to investigate, with ever better datasets, how the bedrock, vegetation density and animal diversity in regions with different rock types but also with differing climates interact and influence each other.“