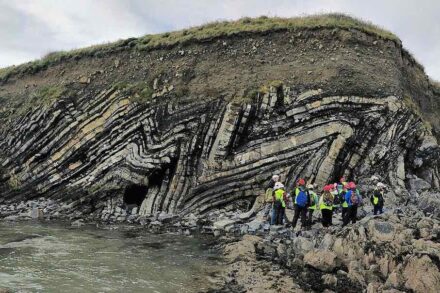 Loughshinny is a picturesque fishing village at the Irish coast near Dublin, and it has an outstanding example of limestone chevron folds (1, 2).

The European Championships of Professions, or EuroSkills, have been postponed to September 22-26, 2021. Graz in Austria’s Styria region will be the venue.

„Pietra Ricostruita“ (Reconstructed Stone) is a new term the producers of artificial stone use to prove the alleged sustainability of their material (Italian).

After 4 years of delay, groundbreaking for the Obama Presidential Center in Chicago could be in August 2021. In the surrounding park, stone blocks will serve as seats, the museum’s façade looks very much like being clad with stone. Architects are Tod Williams Billie Tsien Architects and Interactive Design Architects (1, 2).

Mary McLeod Bethune will be the first African American Woman to represent a state in the US National Statuary Hall in Washington DC. Nilda Comas was chosen from 1600 sculptors to create the statue.

Residents of a small village in the UK are upset about a huge filming set for Star Wars to be built in a former quarry in their backyard.

A stool made of plastic waste resembling marble designed by Dutch studio Plasticiet was bestowed one of the 2021’s Wallpaper Design awards.

The Israelian producer of Caesarstone has acquired Omicron Granite and Tile, operating 17 locations across Florida, Ohio, Louisiana, Michigan, and Alabama.

Spanish Levantina company has released a collection with 7 new colors for its Techlam artificial stone.

“The Witches Seed“ is an opera about the darkest days of the inquisition performed in an abandoned quarry in the Ossola valley. It is on the shortlist for the Fedora Opera Prize.

“Stone Summit“ was an online discussion about challenges and opportunities for the Brazilian stone sector. It is available as a free e-book or in various videos on Youtube (1, 2).

Video of the Month: “Ripple“ is an innovative façade cladding made of marble developed by Italian designer Raffaello Galiotto. Margraf company has realized the first example. We had reported (video, 1).