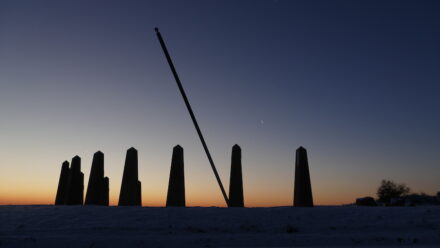 The observer is inevitably reminded of Stonehenge: large stones standing in a circle on a hill in Germany. But while the structure in England from around 4000 years ago probably had a religious background, this modern stone circle was about political and economic concerns.

Our story takes place on the Reiserberg in Schallodenbach, a good 10 km from Kaiserslautern in the Palatinate. There, the go-getting Harald Westrich became mayor of the association of municipalities that includes Schallodenbach in 2014. Westrich knew the hill where the stone circle now stands and wanted something other than more wind turbines there, namely an attraction that would be an economic alternative and at the same time an object of identification for the citizens of the formerly independent villages.

After some thought, he came up with an idea that, on the one hand, tied all the interests together and, on the other hand, was obvious: first, the association of municipalities had 12 individual villages as members, second, red sandstone had been quarried in the area for a long time, and last but not least, the idea of a hiking trail through the area had been in the minds of planners for a long time. 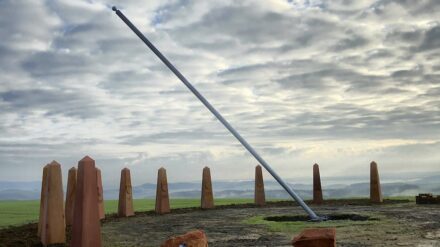 That’s why, since 2020, the 12 stone obelisks have been standing on the Reiserberg, with an inclined steel column stretching up into the sky from their center. You can already guess: it is a walk-in sundial.

Each of the stones, 2.5 meters high and weighing about 1.5 tons, bears the coat of arms of one of the municipalities and also the number of the respective hour.

The raw pieces come from the quarry of the Picard company in nearby Schweinstal. When selecting the really large chunks, care was taken to ensure that they show different shades of color. This is because the red sandstone gives the old farmhouses around the Reiserberg their face. 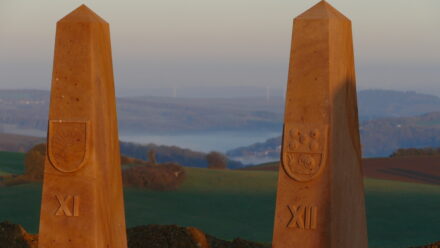 The company Naturstein Sauer in Mainz-Budenheim brought the rough pieces into the shape of the obelisks and provided them with the coats of arms and numerals.

Numerous details had to be clarified. For example, the location and inclination of the shadow pointer were precisely measured so that it would show the real solar time at its location. The steel colossus, which weighed 0.55 tons, was also provided with a strong foundation measuring 2 x 2 x 0.8 meters. Because on the Reiserberg the wind whistles, and the storms do not leave standing for long what is not anchored in the ground.

Currently, the completion continues: the individual obelisks get information boards, on which the history of the village is described. In addition, there is information from geology about the stones, the ages of the earth, fossils from the respective time, and so on. 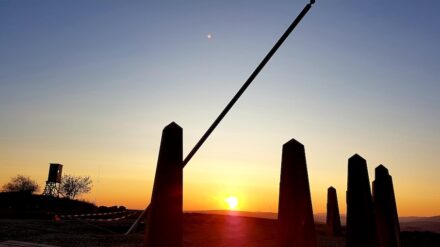 In spring, the high-altitude cycle path for e-bikes should also be completed, in which the walkable sundial will be the highlight in the truest sense of the word. The route will be 60 km long, through the villages of the municipality, but also beyond. It will be equipped with charging stations for e-bikes.

On the slope of the Reiserberg there will be a forest hut with a restaurant.

These tourist ideas were the prerequisite for receiving funding for the project. Thus, the EU contributed the amount of € 225,000. The sundial alone cost around €110,000. 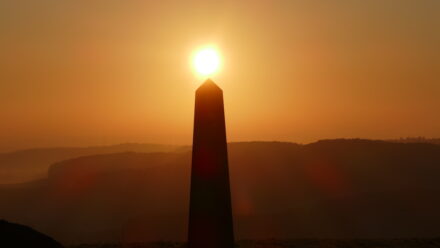