Modern construction with natural stone: a “Floating Stair“ in a historic private home in Toronto, Canada 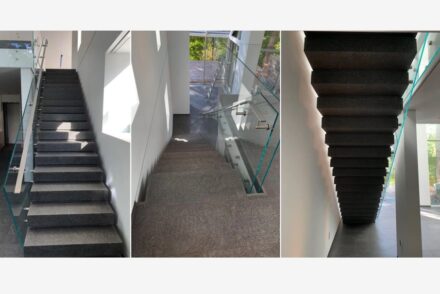 The setting was a historic home picturesquely perched above a ravine in a Toronto suburb, the renowned architect was Peter Clewes of Architects-Alliance, the contractor was Bruce Clemmensen, and one day they both contacted PICCO Engineering with a problem: one of the new staircases in the house could not be anchored to the exterior wall as planned. Because: this wall was only loosely constructed of boulders with little mortar, just the way people used to build.

So, would the staircase have to have a stable foundation? But that would interfere with the lightness and modernity that the architect wanted to give to the interiors.

The team from PICCO Engineering, known for unusual solutions (not only) with natural stone, made a bold suggestion: the staircase could be cantilevered. With steps from natural stone could be continued in such a way also still the floor covering from the basement optically into the upper floor.

Client and architect were enthusiastic about the mere idea but asked the counter-question whether such a thing could be realized if at all.

PICCO’s dry retort was, as heard analogously in a video featuring company CEO Michael Picco: “If we get creative, we can. “ 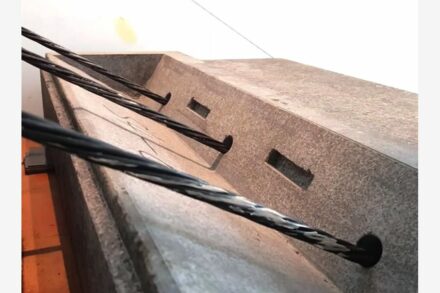 After much calculating and planning, the promised creativity resulted in a structure of 19 solid stone steps with 3 steel cables running through them. Finally, these cables were put under tension, so that the individual parts of the staircase were firmly connected.

This is also known from other constructions, but here the conditions were extreme: the staircase runs comparatively flat, so that there are large bending forces, and comes to a total weight of almost 500 kg.

Since even a company like PICCO hasn’t done everything before and consequently doesn’t know everything, it teamed up with Webb Yates from London for the basic planning. Their engineers are really known for this kind of creativity, and both companies know and appreciate each other.

In this part of the report, we will limit ourselves to just mentioning the particular solutions. In a separate article, we describe of few details (see link below).

One of the special features is that in this “Floating Stair“ each step has a hidden groove that allows it to fit exactly into the step below.

These fits are necessary because if the steps were simply flat, the tension in the cables would simply pull the steps over each other. After all, the applied force amounts to three times 100 kN (simplified: together a good 30 t). 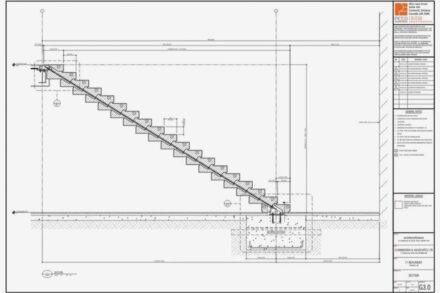 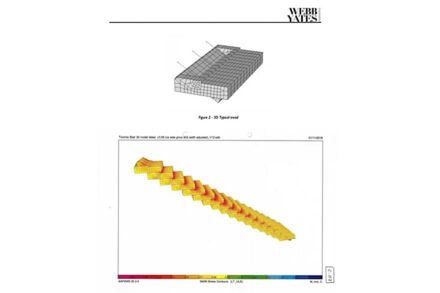 The graphics show, seen from the side, the course of the cables and the fit of the steps.

From the outside, this gives the impression that the steps were simply placed in an ascending position.

In the video, Michael Picco describes with a twinkle in his eye the unfamiliar feeling one gets when standing under the finished staircase: “It’s kind of eerie.“ Because everyone knows that stone is very heavy, and that consequently such an arrangement of steps cannot actually be stable.

Another peculiarity of the construction is the strong foundation that was necessary for the staircase. After all, on the upper floor, the string of steps, so to speak, only leaned.

Elaborate calculations were also necessary for the railing. This is because it is anchored solely in the stone of the steps, and the drill holes were of course not allowed to impair the strength of the stone. 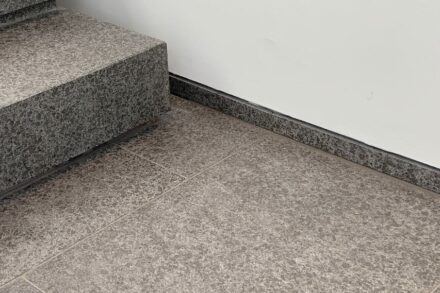 And then there was the natural stone: countless tests were carried out on material samples until the type with the right strength was found. In the end, the decision was made in favor of the Chinese basalt G684 from Fujian province, as it also matched the existing flooring below and above in terms of color.

Finally, the usual load tests were carried out. Step by step, more and more weights were placed on the steps and any movements were determined. The result: fully loaded, there were movements of only 1.5 mm.

The project was bestowed one of the 2020 Pinnacle Awards of the Natural Stone Institute (NSI).