For the time after Covid-19: the Mausoleum of Augustus in Rome is open to visitors again 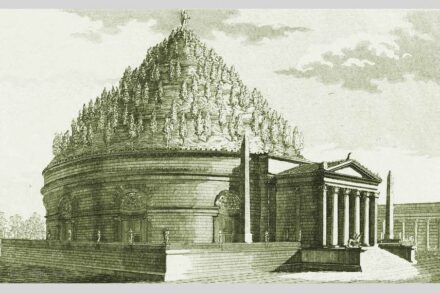 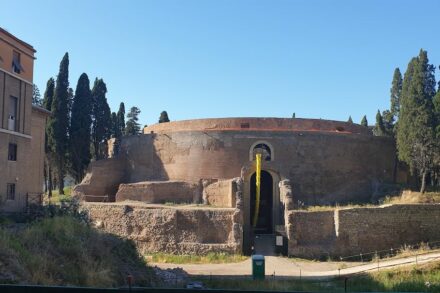 The huge circular building with a diameter of 90 meters was once covered with marble and travertine, of which, however, nothing has been preserved

In Rome, the Mausoleum of Augustus is once again open to visitors after many years of restoration. It is a massive circular building on the former Field of Mars (Campus Martius) on the banks of the Tiber River, then a parade ground. After the end of the Roman Empire, the Mausoleum fell into disrepair for many centuries. Formerly it was an impressive building, covered with marble and travertine outside and inside. For Augustus is considered the one of the Caesars who furnished the city with marble on a grand scale.

The mausoleum was built from 28 to 23 B.C. When construction began, Augustus was only 30 years old – in this respect, the structure was intended early on to record information about the client in stone. Because in ancient times and even many centuries later, only a few people could read and there were no books of today’s kind, so the messages had to be brought to the people by architecture or by means of statues.

For example, the location was chosen not only for practical reasons. From the historian Livius we know that from this place Romulus, son of Mars and one of the founders of the city, is said to have ascended to heaven; later Caesar’s body was burned there. Augustus thus made clear reference to the founders of the city and to his adoptive father Caesar, who was held in the highest esteem by the population.

With the circular shape, Augustus perhaps took the tomb of Alexander the Great as a model. Or he may have borrowed from the tombs of the Etruscan princes.

But one thing is certain, as it says on the mausoleum’s webpage: the complex was larger even than the famous tomb of Mausolos, which in ancient times was considered one of the wonders of the world. 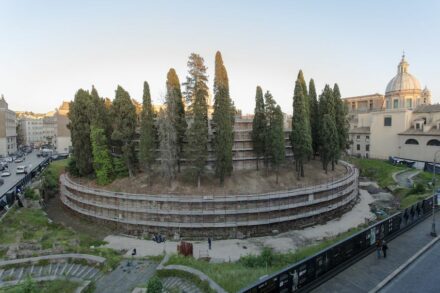 About 300 Roman feet is the diameter of the circular structure, which is almost 90 meters. It was higher than the Pincian Hill next door. On top there were evergreen cypresses and at the very top a 45 m high bronze statue of the dead man with a great imperial gesture.

Large must have been the amount of natural stone used to clad the structure. Certainly, however, Italy’s stone companies were already able to provide the required quantities at that time. After all, white marble from the province of Luna had already become the fashionable stone under Caesar.

The material from the area around today’s Carrara was the preferred decoration for the representative buildings of the state and the rich.

Previously, Rome had imported white marble mainly from the Greek island of Paros. Now it came faster and presumably also cheaper to the port of Ostia and from there by barges up the Tiber to the city.

As a reason for Caesar’s enthusiasm for marble, Professor Diana Kleiner from Yale University suspects Egypt’s pharaoh Cleopatra: she had shown the Roman counterpart the splendor of the stone buildings on the Nile, and the Roman wanted the capital of his empire to measure up to it, she suspects in a lecture on YouTube.

These ambitions came to an abrupt end with the assassination, however.

Augustus apparently took up the idea of his adoptive father, at least as far as the preferred material was concerned. However, he did not get the models for his style in Egypt, but in Greece. “He rebuilt Rome according to the Greek model“ says Professor Kleiner. 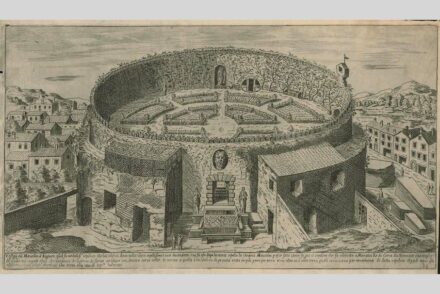 Regarding the remodeling of the city, the biographer of the Roman emperors, Suetonius, noted Augustus’ famous quote, “I found Rome a city of bricks and left one of marble.“

Modern scholars doubt whether this can be taken literally, even though Suetonius mentions numerous concrete building measures undertaken by the emperor, for example 82 new temples. On a web page of the University of California (UCLA), however, Professor Diane Favro speculates that the biographer probably wanted to express the attitude to life of the citizens of Rome with the quotation: due to the endless transport of stone slabs and stone elements with ox carts from the river to the construction sites, there was a permanent traffic jam, which impressed itself emphatically on the contemporaries.

In the current restoration of the mausoleum, € 4.2 million had been spent in the 1st construction phase. To this was now added in the 2nd construction phase another € 8 million, donated by the telephone company TIM. Part of this money was used for the new multimedia presentation for visitors. The work is still ongoing.