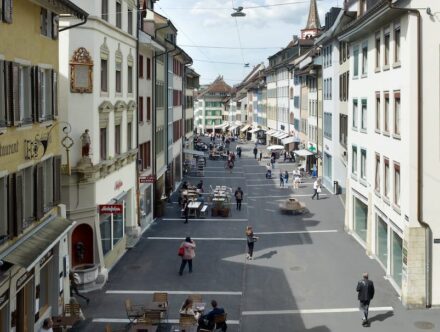 Stripes of light granite structure the main street in the Swiss town of Liestal, whose redesign was awarded the main Flaneur d’Or prize by the Initiative Fussverkehr (Pedestrian Trafic). The bands pick up on the size of the properties and the adjacent facades.

The US government is considering a 25% tariff on natural stones and porcelain tiles imported from Turkey; similar actions could be taken against Austria, Italy, Spain and the United Kingdom Stoneupdate webpage reports. The tariffs are meant as a digital service tax on companies doing business online without having an office in a country. Threatened are also Brazil, India and Indonesia, as Turkish Stone World magazine reports referring to the country’s stone association IMIB (1, Turkish).

A limestone wall fountain ordered by Gianni Versace for his Miami Beach home, the former Casa Casuarina, will be on auction on May 06, 2021. A pair of wells had been commissioned, but only one was delivered when the fashion designer died.

A treasure trove on the history of building in Great Britain is the site of The Construction History Society. Under “Sources and Links“ one may search for natural stone.

“Marbled Salts“ is the name of a new product made of up to 50% plastic. It shall to be an “alternative to natural stone while being decisively more ecological than comparable and mainstream artificial stones“, as said on its webpage.

Video of the month: stone splitting with full risk (1, 2).