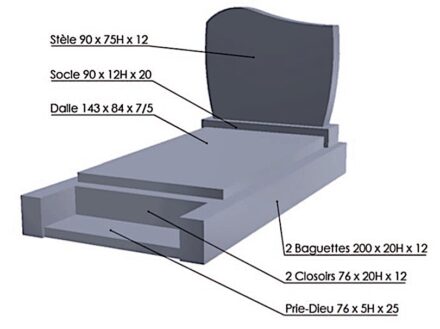 Objects were compared with stone from France and China, and, not surprisingly, the domestic products performed better

Natural stone also needs scientifically based life cycle assessments (LCA) and Environmental Product Declarations (EPDs) in order to survive on the market. This is not only true when dealing with competing materials such as ceramics or artificial stone. It also applies to production in domestic quarries, which must fend off cheap exports. From France now come such data for gravestones. The magazine “Funéraire“, which is published by the same publishing house as the natural stone magazine “Pierre Actual“, has reported on this.

The CTMNC (Centre Technique de Matériaux Naturels de Construction) has commissioned its Funeral Working Group (Groupe de Travail Funéraire) to make a comparison of gravestones from different productions: a granite from Brittany, one from China, and one from a French granite that was shipped to China, processed there, and then returned to France as a finished product.

As is usual in an LCA, all phases of the stone’s life were analyzed: extraction in the quarry, processing in the factory, installation in the cemetery, and finally dismantling and disposal. In addition, there are all the transports, as well as the packaging. The consumption of energy and water, the release of pollutants or greenhouse gases and much more was also determined.

The analysis sometimes goes into great detail: since a life cycle assessment also analyzes the use of the product, the CTMNC specialists assumed a thorough cleaning of the gravestone once a year and calculated a consumption of 20 liters of water for this.

The overall result confirms the expectations: the gravestones from domestic production have a 2.5 times better life cycle assessment than those from China, or 3 times better than those that have traveled around the world. 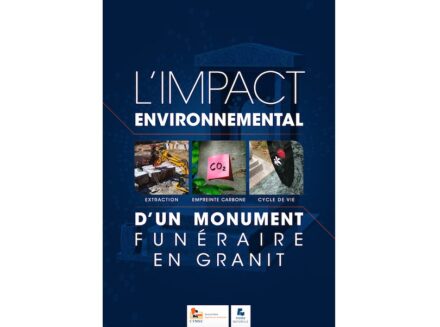 More detailed information can be found in a brochure in French that can be downloaded free of charge from the CTMNC.

However, we could not find a source there from where the CTNMC has the data e.g. for production or processing in China.

The fictitious tomb for which the calculations were made is shown at the top. It has an area of 2 m² and consists of 8 individual parts. The production in France’s large granite centers Brittany, Vosges and Tarn was simulated. A cemetery in Paris was taken as the place of installation.

The calculations are based on the European standard EN 15804+A1. They assume a service life of the tombstone of 30 years. The technicians were guided here by values that resulted – purely mathematically – from nationwide statistics: according to these, 30% of a gravestone is recycled and reused, 24.5% is put to a new use as crushed stone, and 18.5% is returned to the quarry for use in renaturation.

The study was prompted by the fact that in France, too, more and more consumers are taking environmental aspects of products into account when making purchasing decisions.

In its final assessment, Funéraire magazine also adds social concerns, namely that gravestones made in France also create jobs at home: “Choosing a French granite gravestone made in France is a decision with social responsibility.“