If somewhere a boulder seems to be floating in the air, Hannes Ludescher is probably behind it 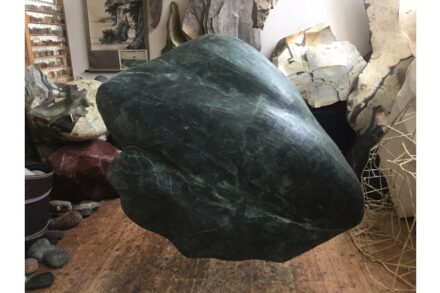 The Austrian artist knots hollow bodies from twigs, which he covers with flexible paper and paints them to look like boulders or stone

Just for fun, we should have asked him whether he might have hidden one of his works in one of the many boulder fields around the world. We would have believed him, as we have experienced him in contact and as other people describe him. Unfortunately, however, his stones would not survive for long outdoors, because rain and wind would have quickly destroyed the filigree work.

Hannes Ludescher is a special sculptor: although he creates stone forms, he does not chisel them out of a stone, but binds them from twigs and envelops the formation with a skin of flexible paper. On this he paints the surface of, for example, a chunk of stone that he has brought home from somewhere.

His patience is almost infinite. This is not only the case when he wanders through the mountains in the Austrian Alps not far from Feldkirch, but also when he is weaving. For this he takes branches of hazel or willow, and also bamboo if it is available, and then he spends hours shaping them into the hollow body he imagines.

Why he doesn’t just use Styrofoam, we asked him. “It’s a quick material to shape,“ he admits, “but I don’t particularly appreciate it.“ You could really read his dislike for that artificial and squeaky stuff between the lines of his email. 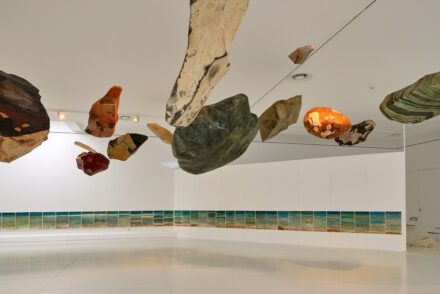 Besides, and here comes the most important thing: the weight of his construction of branches, which he fetches from the garden, is considerably less than that of Styrofoam – because his stones consist almost entirely of air and are intended to fly.

Well, at least they seem to float. 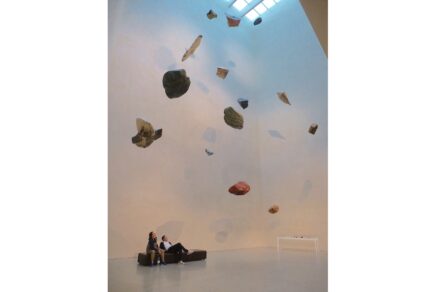 And they are so deceptively real and seemingly really heavy that, as one visitor wrote while looking through Ludescher’s studio window, one cannot believe how these stones could hang on a wall, because this wall should actually collapse immediately. That visitor was reminded of the surrealist depictions of painter René Magritte.

“My objects are 10:1 enlargements of picked-up, hand-sized stones: an elastic skin of paper is stretched over a solid structure of worked hazel rods and bamboo. Painted or used as image carriers for slides, bodies are created that leave their heaviness and hardness behind and conquer the airspace,“ his webpage states.

With Ludescher, too, the sentence applies: no two stones are alike. 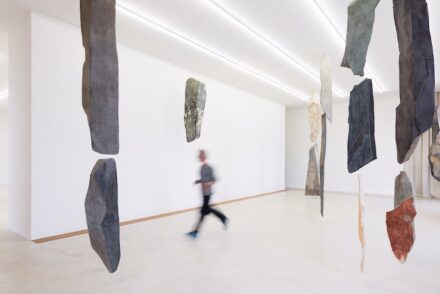 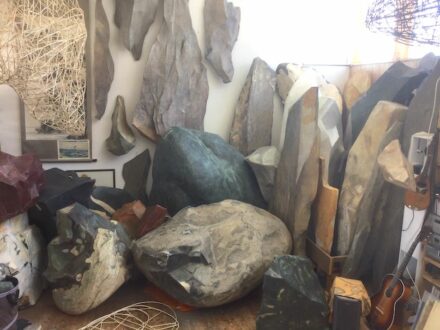 We want to be brief now, because we realize that our thoughts also want to leave the keyboard and go their own ways. Let us add: Ludescher was born in 1946, so he will soon complete his 75th year, studied painting and sculpture at the Academy of Fine Arts in Vienna, had stays in many corners of the earth and turned to flying stones in 1989. A little later he expanded his field of action with slide or video projections on his stones.

At this point our thoughts are already on the way and in conclusion we only say to the reader: Don’t be afraid if somewhere in the cloudy sky a boulder suddenly flies past you.

Maybe Hannes Ludescher is behind it, who has discovered a new field of action for his art and is just showing his stones the infinite possibilities of the wide world. 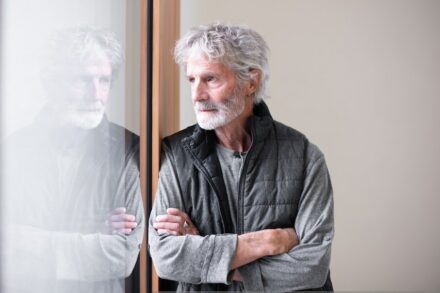