Marlena Senne has won the SwissSkills competition for stonemasons and will represent her country at the EuroSkills in St. Petersburg in 2023 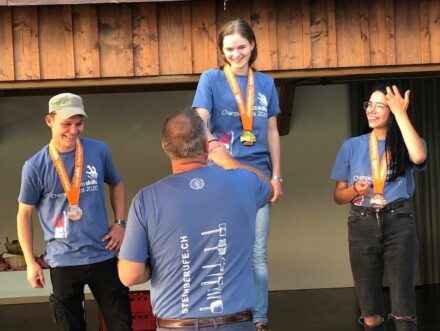 She is a delicate little person, yet she has been a master stonemason for a few months and most recently won the “SwissSkills“ competition in her profession. So we had to ask Marlena Senne how she came to stone in the first place, and she told one of the many curious stories surrounding a career choice: for her, it was clear from the start that she wanted to go into the trades “so that she wouldn’t just sit in front of the computer afterwards,“ as she says, but her brother worked in a metal profession, her sister was a carpenter, and she just wanted to do something different from her older siblings. At some point, she saw work by ice sculptors and was very taken with it – however, this activity would not be possible as a livelihood even in the Swiss mountains.

Finally, someone pointed out to her that there are sculptors who work with natural stone.

But, contrary to what one might expect, stone sculpture did not turn out to be her career. Her passion is the restoration of old stone objects. She says that when working with sculpture, she found that it was not really easy for her to judge an object just by looking at it.

In other words, her thing is the use of stone in architecture, not in art. She appreciates it when, as she says, there are plan drawings as specifications and she can check the result of the implementation on the basis of angle or length measurements.

The fact that she has developed a particular penchant for restoration has less to do with the fact that this is one of the focal points in her teaching and employment company, J. & A. Kuster Steinbrüche AG Bäch. The reason for this specialization within the stonemasonry profession is rather her “deep admiration for the cathedrals of the Middle Ages,“ she says admiringly.

And as a restorer, she comes closer to the work of the craftsmen from the old building lodges than anyone else. “Their work is just fascinating,“ she adds. 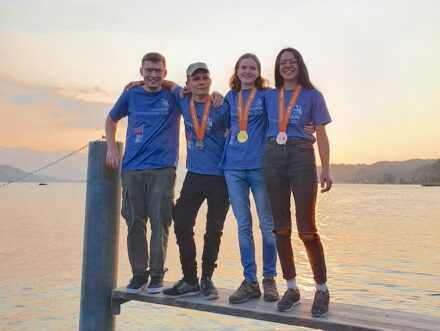 Despite all the fascination, doesn’t working as a stonemason get to her bones? She shrugs it off and laughs: “Working with hammer and chisel is not difficult, and in the apprentice workshop I could lift the stones onto the trestle with the crane. My hands never hurt as long as I didn’t miss the chisel and hit my hands.“

Now on the job site, however, she says it can be exhausting at times, depending on where and how she has to work on the scaffolding. “But I’ve gotten used to it,“ she adds, and in conversation it sounds a little like she even appreciates the physical fatigue at the end of the day.

And anyway, “I enjoy making something great out of stone every day.“

The only thing missing is an obligatory question, namely whether she thinks her profession could be something for women in general. “Why not?“ comes the curt answer, “any woman can do it if she wants to.“

And her future career path? At the moment, she’s doing further training in historic preservation, and as a result of her winning title at SwissSkills, she wants to compete as Switzerland’s representative at EuroSkills in 2023. That’s when the vocational championships will be held at European level in St. Petersburg, Russia.