From a stone that was only discovered in Utah in 1995 (Honeycomb Calcite) and an artist (Jonna Ramey), who masters the challenge of the very special material 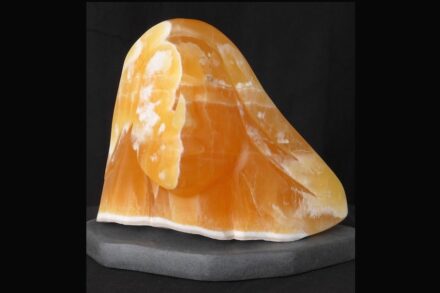 In the U.S. state of Utah, there is a stone that was discovered as recently as 1995 and is found nowhere else in the world: the Honeycomb Calcite or Amber Onyx. On March 16, 2021, it was named the official stone of Utah by the governor there, and we found an artist based in Salt Lake City who has worked very hard on it. “Because honeycomb calcite has such inherent beauty, I work to get past that and into the story I want to tell.”

Both her commentary and the finding story are so unusual that we want to introduce the stone and the sculptor in more detail.

The discoverer of the Honeycomb Calcite is said to be a certain Floyd Anderson, with a PhD in psychology and now over 95 years old, who wanted a bit of adventure beyond his job in the 1990s. He set out with a group of accredited geologists and students to dig for emeralds, and in the glare of the sun found a blank spot in the ground that glowed like amber. The whole thing took place near the town of Hanna, where Shamrock Mining now sits.

The company now mines the stone and sells it all over the world. It is often used in interior design for backlit walls, and in many cases for decorative everyday objects or jewelry.

The petrographic data can be found on the website we have linked below.

Jonna Ramey is the sculptor we mentioned above. For her, sculpting is a kind of storytelling: she doesn’t just want to create forms that are beautiful and interesting, but to articulate a thought in stone.

In doing so, honeycomb calcite doesn’t necessarily make it easy for her. Like all decorative types of stone, it has an extremely strong life of its own: a face, for example, can hardly be created in such types, because the structures and colors given to the material by nature make much of it hardly recognizable by the sculptor’s hand.

In contrast, however, these very stones also offer unusual possibilities for design. Mostly the artist has to work two-dimensionally and with the given textures, as in “Two Spirit“ at the top. 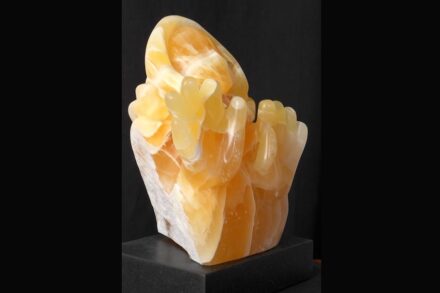 For example: In the work “Push Back (Malala)“ in the photo above, Jonna Ramey talks about the artist Malala Yousafzai, who works to provide education for girls and young women. At 1st glance, the sculpture is impossible to grasp – you have to walk around it to see the hands in a defensive posture as a counter to the pressure on young women. The face is only hinted at, details would simply not be possible.

This gives many of Jonna Ramey’s sculptures a kind of rapture, as if they came from another world and were there only for themselves.

She learned this way of working 20 years ago from sculptors from Zimbabwe who lived in Salt Lake City, she tells us in an email.

Essentially, there are 2 procedures for her: either she has an idea in her head and looks for the matching stone, or she finds a piece of stone and gets the idea through it. 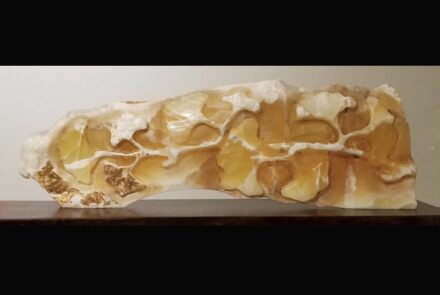 The “Gingko Bough” was an old idea she had sketched on paper and hung on the wall in her studio. “While knocking around the honeycomb calcite quarry, I ran onto a bin of castoffs. There was the right stone for my gingko idea,“ she writes. 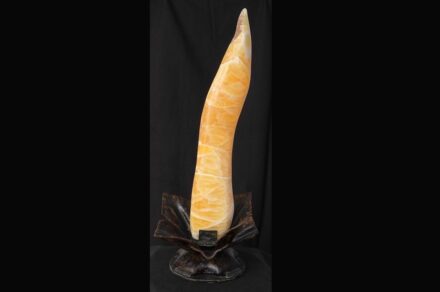 Not so with “Maguey Bloom“: “I first found the discarded utility pole anchor along a road and immediately ’saw’ a maguey or agave plant. I knew I needed to sculpt a bloom for it. So, in that case, I went on a search in the quarry for a stone that would work with my idea and the existing steel found object. Of course, I came home with 5 possible stones and carved the one that really spoke to me. The rest join my pile, waiting for a future project…“

One would think that she had found the material of her life with the honeycomb calcite. Far from it: “With this show, my exclusive carving of this material is over. Now, I do work with other stones,“ she writes.

Then, while writing an email, she apparently looked up from her screen and looked around her studio. So she still adds: “That said, I am working on a piece of honeycomb calcite right now. I love the challenge and familiarity of the stone, it is local, fairly easy to procure and abundant. I’m fortunate to live only 80 miles from the quarry.“

Petrographic data of the Honeycomb Calcite