On show in London’s Natural History Museum: a fragment of the Winchcombe meteorite, a new mineral discovered in the collections, and several temporary offers about the wonders of our planet Earth 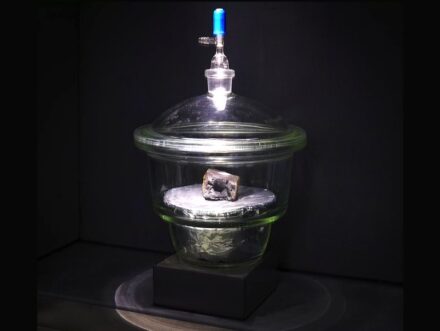 “While you were away“ is the title of a new post-pandemic show in the Natural History Museum in London informing about discoveries its researchers made during the lockdown, a press release informs:

Visitors to the Museum will be among the first in the world to see a fragment of the awe-inspiring Winchcombe meteorite that fell to Earth as a fireball in February this year, as well as a new mineral from Cornwall which Museum scientists discover – named kernowite. The new display, located in the Vault alongside treasures such as the Aurora Pyramid of Hope, a collection of 296 naturally coloured diamonds, sits at the back of the Mineral Gallery and represents just a small selection of the fascinating work achieved by our scientists over the lockdown period.

Prof Caroline Smith, Head of Earth Sciences Collections and Principal Curator of Meteorites at the Museum, says: “The Winchcombe meteorite is a carbonaceous chondrite, an extremely rare type of meteorite that holds crucial information about the origins of our solar system. It was recovered just hours after it was seen to fall and has had minimal terrestrial contact. To be able to put it on public display is hugely exciting!“ 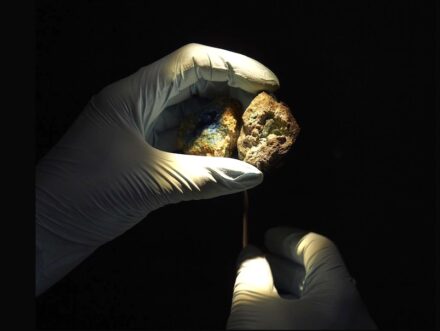 Displayed next to the meteorite is a newly discovered mineral named kernowite. For over 220, years this specimen, taken from the Collection, was thought to be the mineral liroconite. It was not until December 2020 that an international team of scientists led by the Museum discovered it had a different chemical composition, meaning it was a new species. The team chose its name to reflect its place of discovery; Kernow is Cornwall in the Cornish language.

Three new temporary offers:
* “Our Broken Planet: How We Got Here and Ways to Fix It“ opening on 21 May is a brand-new free display offering a fascinating look through the Museum’s collection. Each object has been selected by one of the Museum’s scientists and tells a different story about human impact on the planet. From bats to bees, the world’s largest butterfly to a 3m Black Marlin, the display is an exploration of the power of humans and the resilience of nature. The programme looks at the context of the current pandemic as well as how NHM scientists are finding solutions from nature for nature.
* The Museum’s popular “Wildlife Photographer of the Year exhibition“ and
* the 5-star reviewed “Fantastic Beasts: The Wonder of Nature“, the result of a creative partnership between the Museum, the BBC and Warner Bros.