At one spot in the Charyn Canyon, Kazakhstan, five million years of climate change are preserved 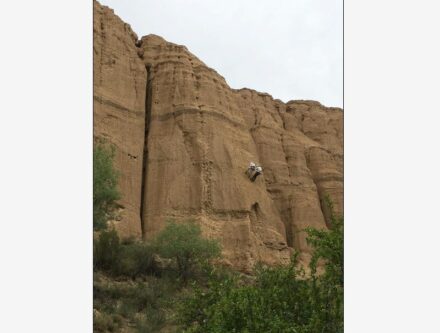 An 80-meter-thick sedimentary helps scientists to understand the feedback mechanisms between land, atmosphere and ocean

Paleo researcher Charlotte Prud’homme, who until recently worked at the Max Planck Institute for Chemistry and is now a researcher at the Université Lausanne, explains: “The 80-meter-thick sedimentary sequence we found at Charyn Canyon in southeast Kazakhstan provides us with a virtually continuous record of five million years of climate change. This is a very rare occurrence on land!“

“The alternating dust and soil layers provide the first reliable evidence, in one place, of long-term interactions between major climate systems on the Eurasian continent.“

Until now, little has been known about the role Central Asia plays in global climate evolution past and present. Earth’s climate evolution over the past five million years has been understood mainly from the perspective of marine mechanisms.

In contrast, the significance of climate feedbacks that originated on land – rather than in the oceans, lakes or ice cores – has remained largely unexplored. The international research team has filled this gap with their field research in Charyn Canyon.

The geographical location of the study site in the middle of Central Asia was of key importance to the team: “We needed to find a place that was inland and as far away from the ocean as possible, “ Kathryn Fitzsimmons, Group Leader of the Terrestrial Paleoclimate Reconstruction Research Group at the Max Planck Institute for Chemistry, explains. “We could hardly find a more continental situation than at Charyn Canyon in southeastern Kazakhstan. “

The semi-arid climate of the canyon, and its landscape, was shaped by the interaction between the mid-latitude westerlies and the high-latitude polar fronts, and by sediment transported from the nearby Tien Shan mountains. Charyn Canyon is ideal, according to Kathryn Fitzsimmons, for studying long-term land-climate feedback mechanisms.

The semi-arid climate of the canyon, and its landscape, was shaped by the interaction between the mid-latitude westerlies and the high-latitude polar fronts, and by sediment transported from the nearby Tien Shan mountains.

The information from this most complete terrestrial climate archive for the past five million years provides a very valuable basis for future climate models. Charlotte Prud’homme literally says, “We have opened a door.“