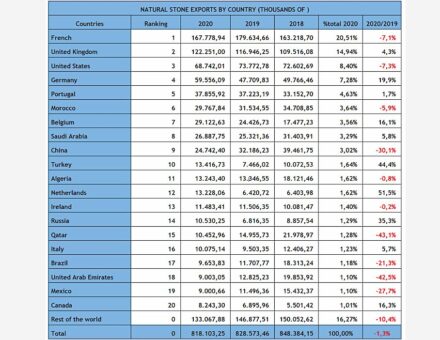 Around two-thirds of deliveries are semi-finished or processed material / Most important target country is France, followed by the UK, the USA and Germany

Have Spanish natural stone exporters performed the miracle and stopped the continuous downward trend for 5 years, despite the Covid-19 crises? The €818.1 million they had achieved in 2020 with sales abroad was only (-)0.46% less than the year before (€821.8 million). At the same time, their exports had amounted to €919.2 million in 2016 and since then had decreased by almost 10% overall. These figures have been published by the Cluster Piedra.

The share of raw blocks in the export volume remained almost the same: it amounted to €247.4 million and was thus +0.48% above the value of the previous year. Suppliers of semi-finished or processed material achieved more than double the value, namely €570.7 million. Here, however, there was a decrease of (-)2.04% compared to 2019.

China, the world’s largest buyer of raw blocks, only reaches 9th place in the ranking of target countries for Spain’s exports (€25 million, -30%). Drastic declines were also recorded in deliveries to Middle Eastern countries. Here, however, only comparatively low sums are achieved, albeit with finished products.

Export leader was the province of Ourense (€196 million) followed by Alicante (€127 million), Pontevedra (€125 million), Almería (€89 million) and Leon (€70 million). The other parts of the country follow at a considerable distance.

Javier Fernández Cortés, Secretary General of the Center, writes in his comments on the figures: “In addition to traditional export, there are new internationalizing behaviors that need to be reviewed. Without a comprehensive nature, the following stand out:
– Offshoring in all its variants. More and more Spanish companies are in addition to the relocation of all or part of the production process, create subsidiaries in other countries, etc. In many cases this expansion includes the exploitation of quarries beyond our borders.
– Re-exportations and reimports to take advantage of tariff advantages over certain areas are significant in the natural stone industry.“

The Cluster Piedra is the service center for the stone industry of all Spain. It was founded to take care of the marketing of the local varieties and to help the companies on their way into the future through training and service. 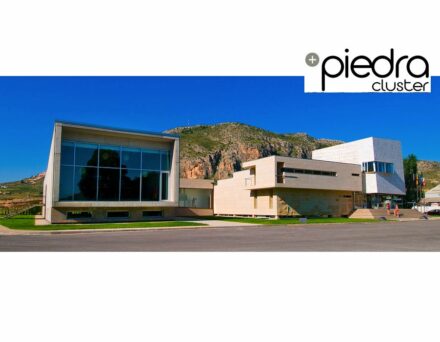