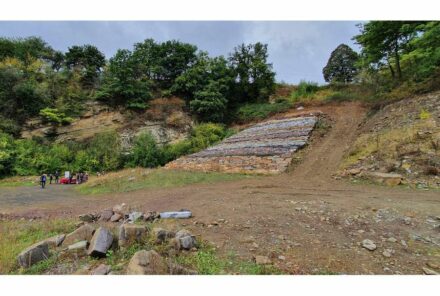 “Geological Wall“ (Mur géologique) is the title of the new attraction, which is almost finished near the village of Comblain-au-Pont about 30 km from Liège

Belgium may be a small country, but not afraid to tackle the really big issues there. “Palaeozoic Era is completed and Mesozoic Era was just begun,” Camille Ek writes us.

We had asked him about the current status of the “Geological Wall“ (Mur géologique), which is currently being built near the village of Comblain-au-Pont about 30 km from Liège. There, the past 540 million years of Belgian “history“ will be represented by stone from the respective geological eras.

Camille Ek was one of the initiators of the project, to be more precise: during a guided tour given by the geologist, he showed a stratigraphic map of the country, i.e., a representation of the rock layers in the subsoil, and then the sculptor Paolo Gasparotto, as one of the participants, asked whether it would not be better to depict something like this in stone rather than on paper. 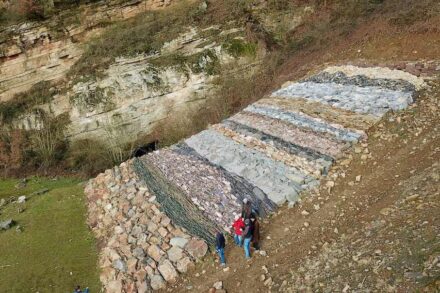 The idea drew circles: in Comblain-au-Pont a non-profit association for nature education was found, which deals with the mediation of knowledge about nature, the village administration showed itself willing to make a former quarry site available, and finally there was support from the Walloon regional government, among others. Architect Jean-Marc Jodogne was also recruited for the design.

Paolo Gasparotto rounded up a few friends and then the work began under expert guidance. The idea was simple: a kind of carpet is laid out on a flat slope in the quarry; the carpet is given the shape of a trapezoid to convey that the layers higher up rest on those below; one meter high corresponds to 10 million years. 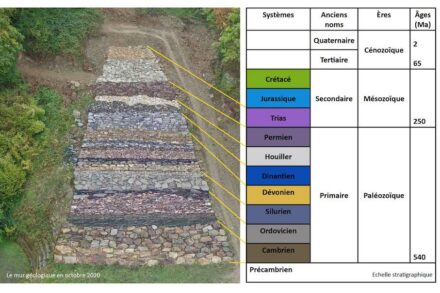 The layers are made up of the types of Belgian stone that were formed in those geological eras: at the bottom, quartzites that were formed when Belgium was part of a paleocontinent in the southern hemisphere, and above them, the products of marine sedimentation or volcanism that were added when the country migrated to its current position in the northern hemisphere as part of plate tectonics.

The ages of the earth can be clearly distinguished by the colors of the stones. The expert can read additional information from this – so there is a lot to tell on guided tours, which there will be one day. “A booklet will be published when the wall is completed,“ writes Camille Ek. And adds, knowing the course of the world: “Only the time is missing to get it ready.“

The initiative has since launched a Web page in French. Comblain-au-Pont can be reached by bus from the Liège-Villemont train station. There, you have a walk of about a kilometer up the slope before you reach the old quarry. 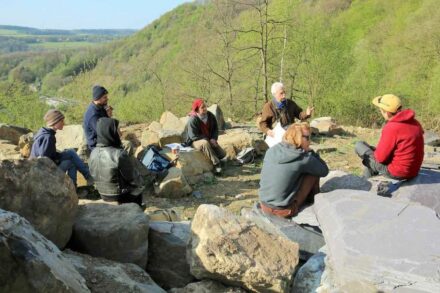 Dr. Francis Tourneur, Secretary General of the Natural Stone Association Pierres et Marbres de la Wallonie, and involved in the project from the beginning, says in a description that the geological wall should also contribute to the marketing of local varieties.

But what if, out of sheer enthusiasm, guests tear rocks out of the wall and take them with them? That has not happened so far, Camille Ek reassures.