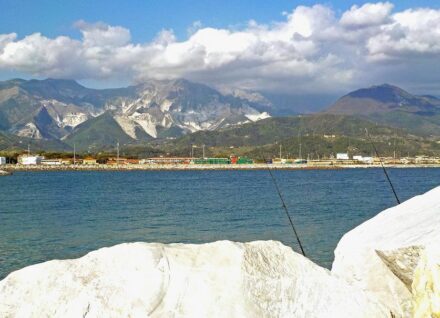 “Let’s give them (the mountains) a different future than the present one,“ write the campaigners of Apuane Libere on their webpage

Update: the counter-protest of the stone companies (see below)

In the Apuan Alps around Carrara, the tone between quarry operators and environmentalists has become even harsher than it already is. Last Sunday (July 04, 2021), as in the previous year, groups of campaigners moved to the peaks in the area to demand an end to marble quarrying (“Basta Cave“) in a “loving embrace of the mountains“, as reported by the daily Il Tirreno. Conversely, the natural stone association Cosmave, for the first time, had called on its members to symbolically squatter the quarries, thus making clear the stone sector’s importance for the region and the “cohesion between companies, workers and their families.”

So actually it was just business as usual, as has been known in the area for a long time. However, the daily La Nazione wrote “Now it has become a battlefield,“ even if so far people have only been going at each other with words and not with their fists.

Meanwhile, the marble companies feel exposed to “false accusations and smear campaigns.“ The campaigners create a mood with false allegations in the social media, the stone people say.

Since April 2021, a new player has emerged in the conflict, and it seems to be targeting the confrontation. It is “Apuane Libere“, an association of various groups of campaigners and environmentalists. Its mission, as the name suggests, is a liberation struggle.

Its web page also argues with the protection of animal and plant species in the region, and on top of the self-portrayal the group calls itself “non-violently“.

However, a crude love of the mountains runs through all the arguments.

Already during the action on the mountain peaks in 2020, the campaigners had chosen alarming words: on a ridge had been rolled out a banner with the message “Le cave uccidono il passato e il futuro delle Apuane“ (The quarries kill the past and the future of the Apuan Alps).

“Let’s give them (the mountains) a future different from the present one,“ the webpage reads.

Counter-protest of the stone companies 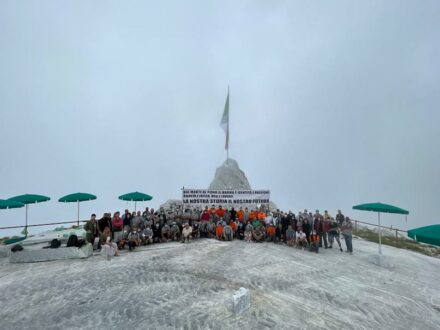 The Henraux company, which celebrates its 200th anniversary this year, had joined the call of the Cosmave association and symbolically occupied its quarry of Cervaiole with its workers. The site has been a particular thorn in critics’ side for many years, but it is operated with a permit from the authorities under strict conditions.

In a press release, the president of Henraux, Paolo Carli, complains that the environmentalists would only insult the companies of the stone sector with polemics and untrue allegations.

He insists that any dialogue between the two sides must be marked by an understanding of the long history and importance of the marble industry to the people of the region: “Such a dialogue must start from respect for the workers who feed their families, pay the mortgage on the house, let their children study … and rely on a good pension at the end of their working lives.” That is to the credit the stone business, and employees and their families made that clear with the quarry squattering.

In the press release, he expresses his sincere thanks to trade union secretary Alessia Gambassi (CGIL) and MP Umberto Buratti (Partido Democratico), who were present at the Cervaiole quarry at 1150 meters above sea level. Senator Massimo Mallegni is also explicitly mentioned as a supporter.