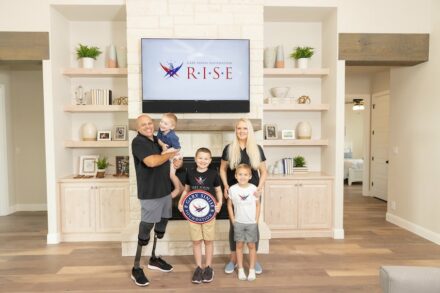 Juan immigrated to the United States with his family from Lima, Peru in 1986. He joined the Armed Forces shortly after graduating from high school. During the Gulf War in 1990, Guerrero deployed to Saudi Arabia with B Company 1/3, 3rd Marine Regiment, known as the “Lava Dogs,” based at Marine Corps Air Station Kaneohe Bay in Hawaii. Years later on July 26, 2007, Guerrero, who at the time had 350 missions under his belt, was driving back from a mission with his convoy when an explosively formed penetrator (EFP), the single-most lethal weapon American forces faced in Iraq, struck his vehicle. The EFP detonated approximately 25 feet ahead of his vehicle, whose fragments penetrated the bottom of his door, striking his right calf. He broke his tibia and fractured his left ankle and the skin and muscle surrounding it. His lower legs were severely injured.

In June 2014 Juan developed a rare form of skin cancer on his left heel, which resulted in his left leg being amputated below the knee two years later. He is now a double amputee below the knees and is cancer-free.