Former limestone quarry near Salzgitter, Germany, recognized as worldwide geological reference point for the transition between Turonian and Coniacian during Cretaceous 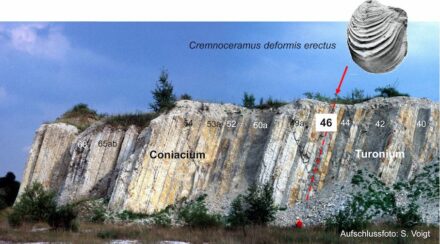 The site is a perfect rock boundary sequence over 40 meters in width, with a well-defined record of events that took place in this interval of geological time

An international team of geoscientists has thoroughly investigated 40 meters of the geological strata sequence in the former limestone quarry at Hasselberg near Salzgitter, Germany. The researchers determined that it shows a perfect sequence of the transition between Turonian and Coniacian without gaps, and it therefore represents a perfect rock sequence to serve geoscientists from all over the world as a reference for their research – a “Global Stratotype Section and Point (GSSP)“ or, in the jargon of geosciences, a “Golden nail“.

Certain groups of bivalve mollusks of the family Inoceramidae first appeared in the Coniacian and are found in large numbers in Salder. In Bed 46 of the quarry, the scientists found the oldest appearance of the Inoceramid species Cremnoceramus deformis erectus, which marks the time boundary. Careful studies also revealed other microfossils and a characteristic change in the ratio of the carbon isotopes 12C and 13C, a so-called negative anomaly in the carbon cycle.

“This means that variable geological sequences, such as marine shelf sediments in Mexico or the deep sea in the tropical Atlantic, can now be compared and classified in time,“ explains Prof. Silke Voigt (Goethe University Frankfurt). “This is important to be able to make an exact chronological classification even in the case of incomplete successions and ultimately to see, for example, what the climate was like at a certain time in the past in different places in the world.“

Professor Ireneusz Walaszczyk (University of Warsaw) says: “The sequence in Salzgitter-Salder prevails over other candidates, for example from the USA, India, Madagascar, New Zealand and Poland, because we have a perfect rock boundary sequence here over 40 meters, with a well-defined record of events which took place in this interval of geological time.“

“The Zechstein Sea left behind massive salt layers in the North German Basin more than 250 million years ago,“ explains André Bornemann (Lower Saxonian LBEG, Germany). “The rock layers deposited later exerted pressure on these salt layers, some of which bulged up into large salt domes, deforming younger layers in the process. Salder is located near such a salt dome, so that here the fossil-rich rock layers of the Cretaceous period are steeply upright, resulting in a wonderful profile that is very accessible for scientific investigations. That’s why we at LBEG have designated this place as a geotope, and this is one of the most important geopoints of the Harz-Braunschweiger Land-Ostfalen UNESCO Global Geopark.“

In the limestone quarry at Hasselberg near Salder in the northeast of the Salzgitter mountain range, limestone and marl used to be quarried for the cement industry and later for ore processing. Today, it is the location of a well-known biotope and geotope, which is the property of the Stiftung Naturlandschaft (Natural Landscape Foundation) and established by the BUND regional association of Lower Saxony. While the care of the quarry site has been entrusted to the Salzgitter district group of BUND, the Harz-Braunschweiger Land-Ostfalen UNESCO Global Geopark looks after the geoscientific part of the quarry. The quarry is not freely accessible for nature conservation reasons, but guided walks are occasionally offered.

90 million years ago, in the second half of the Cretaceous, it was tropically warm on Earth: the ice-free poles ensured high sea levels, and Central Europe consisted of a cluster of islands. In the sea, ammonites developed a tremendous variety of forms, while dinosaurs reigned on land. The first flowering plants began to compete with horsetails and ferns. About 89.39 million years ago, the climate began to cool slightly, sea levels began to sink, and a new period in Earth history, the Coniacian, replaced the Turonian.

The scientific team was led by Prof. Silke Voigt from the Goethe University Frankfurt, Prof. Ireneusz Walaszczyk from the University of Warsaw and Dr André Bornemann from Lower Saxonian LBEG, Germany.