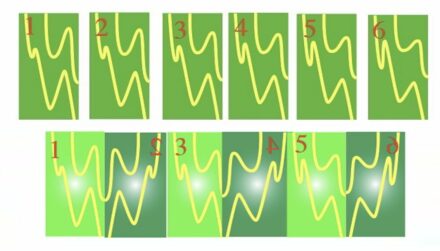 In our main article about the villa in Terrace House 2 in the ancient city of Ephesos, we described the marble bookmatch. There is an irregularity in the laying of the stone slabs there – we show here what probably was the problem and how the stonemasons solved it at that time.

A bookmatch as shown results when slabs are cut from a block and placed so that those with even numbers are rotated.

This is how almost the entire base in Terrace House 2 is designed. But on the south side of the wall the order of the plates is changed: it starts here with 1-2 and then continues with 5-4 and 7-6.

The reason, according to the findings of the research group led by Professor Cees Passchier, is that apparently plate 3 was broken during polishing and had to be replaced.

However, the problem thus created could have been solved more simply, namely by simply turning the following plates 4-5 and 6 backwards again and then adding plate 7 from the outside. Thus: 1-2 / 4-5 / 6-7. 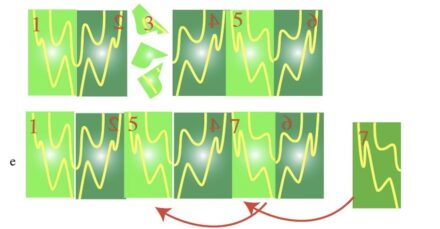 The reason becomes obvious when one considers the (presumed) working method of the polishers:
* before they began their work, they first laid the slabs side by side as they would appear in the base. Then the polishing began, probably on all the plates at the same time due to time constraints.
* but if then an already completely or only partially polished plate broke (in this case: number 3), they could not simply take out the broken plate and turn the following ones backwards and add an additional plate from the right. Because: if you started polishing the plates on both sides, the risk became high that you would fall below a critical thickness and some plate would break. After all, even with polishing only on one side, they are only about 15 mm thick – and this with this marble, which is known to crack readily.
* the Romans found a better way by interchanging the following pairs of slabs.

This did lose a little of the perfect symmetry they were aiming for. But this minor loss of aesthetic impact was acceptable given the fact that the risk of breakage, and therefore cost, was significantly reduced. 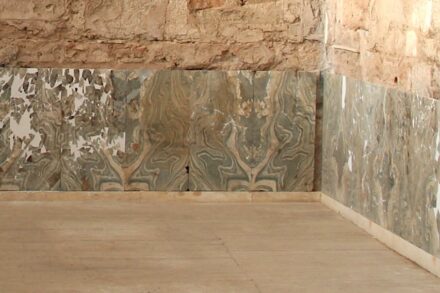