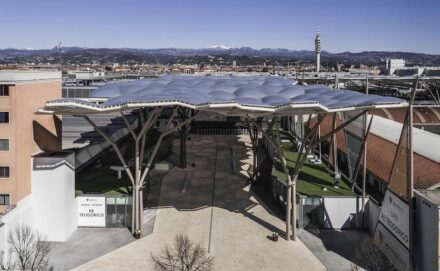 Marmomac 2021 (September 29 – October 02) will be held as an in-person event, organizer Veronafiere has again confirmed in a press release these days. In response to the Covid-19 pandemic, there is some news:

* The Italian Stone Theatre, normally in Hall 1, will be relocated to Halls 11 and 12. The artistic works presented there this year have as theme “Time in Stone“: “Telling the story of natural stone through time is one way of reclaiming the authenticity and solidity needed today so that mankind can rediscover itself alongside new creativity,“ is said in another press release. 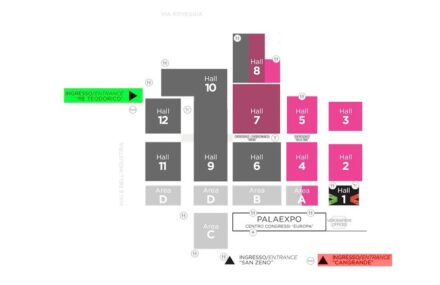 Presumably, the entire fair will be moved towards these halls on the fairground, as it was already planned for 2020 (see link below). As accesses remain the previous main entrance Cangrande and San Zeno and Re Teodorico. The latter will be the fastest way to the halls in operation and to the parking lot P7.

* Instead of the big stage in Hall 1, there will be talks and discussions at 3 locations under the title “Marmomac Talks“. These sites are called “Corners“.

* Marmomac Plus (“M+“) is a new internet portal that has been online since February 2021 and, according to the webpage, will remain active until the end of the year. Exhibitors have the opportunity to present themselves virtually and make contact with new customers and buyers. The goal is “to bring together the marble community,“ as it said on the webpage. The price for participation is 115 €.

* We had read in the Italian magazine Marmomacchine (issue 271) that, under the title “Marmo+Solutions“, there will be standardized booths for exhibitors meant mainly für the presentation of products instead of materials. The international wine fair Vinitalia, also organized by Veronafiere, had offered “turnkey“ stands earlier this year. 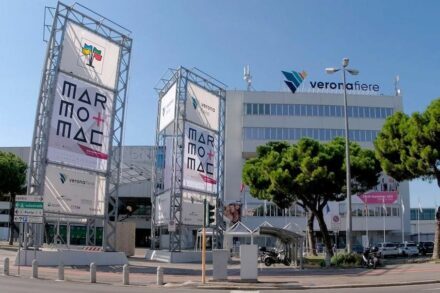 * Access to the fair will be possible only under the Veronafiere Safetybusiness protocol. The latest news will be available on the web page, e.g., under “Exhibit“ or under “Visit“.

In addition to adapting the program and the fairground to the pandemic, the challenge for an international event such as Marmomac is to include exhibitors and visitors from outside the European continent.

For example: in Xiamen in May this year, although there was no joint stand of the Turkish association, some exhibitors operated their booths with their representatives in China. Seven companies took advantage of the opportunity. Italy’s companies also had a joint stand “with local staff“, Confindustria Marmomacchine association informs.

Marmomac, for its part, has made strong efforts to attract buyers to Verona. Participants are offered accommodation and meals, but in return, they have to complete a compulsory program. Travel expenses are not covered. The initiative‘s “main targets“ are in alphabetical order: “Saudi Arabia, Austria, United Arab Emirates, France, Germany, Morocco, Qatar, United Kingdom, Russia, United States, and Switzerland.“ The effort is supported by the association and the Italian Foreign Trade Organization (ICE).

As usual, the Best Communicator Awards and the Icon Award are to be presented this year.

Stone-Ideas.com explicitly supports the international trade fairs because they are marketplaces not only for products but also important for the exchange of ideas and innovations.

Therefore, editor-in-Chief Peter Becker will be present at Marmomac. We will not have a booth, please contact us in advance by mail.